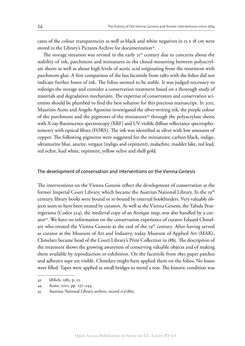 24 The history of the Vienna Genesis and former interventions since 1664 cates of the colour transparencies as well as black and white negatives in 13 x 18 cm were stored in the Library’s Pictures Archive for documentation43. The storage situation was revised in the early 21st century due to concerns about the stability of ink, parchment and miniatures in the closed mounting between polyacryl- ate sheets as well as about high levels of acetic acid originating from the treatment with parchment glue. A first comparison of the last facsimile from 1980 with the folios did not indicate further losses of ink. The folios seemed to be stable. It was judged necessary to redesign the storage and consider a conservation treatment based on a thorough study of materials and degradation mechanism. The expertise of conservators and conservation sci- entists should be plumbed to find the best solution for this precious manuscript. In 2011, Maurizio Aceto and Angelo Agostino investigated the silver writing ink, the purple colour of the parchment and the pigments of the miniatures44 through the polyacrylate sheets with X-ray fluorescence spectroscopy (XRF) and UV-visible diffuse reflectance spectropho- tometry with optical fibres (FORS). The ink was identified as silver with low amounts of copper. The following pigments were suggested for the miniatures: carbon black, indigo, ultramarine blue, azurite, vergaut (indigo and orpiment), malachite, madder lake, red lead, red ochre, lead white, orpiment, yellow ochre and shell gold. The development of conservation and interventions on the Vienna Genesis The interventions on the Vienna Genesis reflect the development of conservation at the former Imperial Court Library, which became the Austrian National Library. In the 19th century, library books were bound or re-bound by external bookbinders. Very valuable ob- jects seem to have been treated by curators. As well as the Vienna Genesis, the Tabula Peut- ingeriana (Codex 324), the medieval copy of an Antique map, was also handled by a cur- ator45. We have no information on the conservation experience of curator Eduard Chmel- arz who treated the Vienna Genesis at the end of the 19th century. After having served as curator at the Museum of Art and Industry, today Museum of Applied Art (MAK), Chmelarz became head of the Court Library’s Print Collection in 1885. The description of the treatment shows the growing awareness of conserving valuable objects and of making them available by reproduction or exhibition. On the facsimile from 1895 paper patches and adhesive tape are visible. Chmelarz might have applied them on the folios. No losses were filled. Tapes were applied as small bridges to mend a tear. The historic condition was 43 Irblich, 1985, p. 25. 44 Aceto, 2012, pp. 237–244. 45 Austrian National Library archive, record 113/1863. Open-Access-Publikation im Sinne der CC-Lizenz BY 4.0
zurück zum  Buch The Vienna Genesis - Material analysis and conservation of a Late Antique illuminated manuscript on purple parchment"
The Vienna Genesis Material analysis and conservation of a Late Antique illuminated manuscript on purple parchment