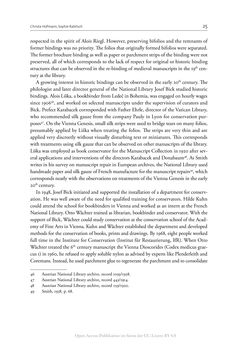 Christa Hofmann, Sophie Rabitsch 25 respected in the spirit of Alois Riegl. However, preserving bifolios and the remnants of former bindings was no priority. The folios that originally formed bifolios were separated. The former brochure binding as well as paper or parchment strips of the binding were not preserved, all of which corresponds to the lack of respect for original or historic binding structures that can be observed in the re-binding of medieval manuscripts in the 19th cen- tury at the library. A growing interest in historic bindings can be observed in the early 20th century. The philologist and later director general of the National Library Josef Bick studied historic bindings. Alois Liška, a bookbinder from Ledeč in Bohemia, was engaged on hourly wages since 190646, and worked on selected manuscripts under the supervision of curators and Bick. Prefect Karabacek corresponded with Father Ehrle, director of the Vatican Library, who recommended silk gauze from the company Pauly in Lyon for conservation pur- poses47. On the Vienna Genesis, small silk strips were used to bridge tears on many folios, presumably applied by Liška when treating the folios. The strips are very thin and are applied very discreetly without visually disturbing text or miniatures. This corresponds with treatments using silk gauze that can be observed on other manuscripts of the library. Liška was employed as book conservator for the Manuscript Collection in 1920 after sev- eral applications and interventions of the directors Karabacek and Donabaum48. As Smith writes in his survey on manuscript repair in European archives, the National Library used handmade paper and silk gauze of French manufacture for the manuscript repairs49, which corresponds neatly with the observations on treatments of the Vienna Genesis in the early 20th century. In 1948, Josef Bick initiated and supported the installation of a department for conserv- ation. He was well aware of the need for qualified training for conservators. Hilde Kuhn could attend the school for bookbinders in Vienna and worked as an intern at the French National Library. Otto Wächter trained as librarian, bookbinder and conservator. With the support of Bick, Wächter could study conservation at the conservation school of the Acad- emy of Fine Arts in Vienna. Kuhn and Wächter established the department and developed methods for the conservation of books, prints and drawings. By 1968, eight people worked full time in the Institute for Conservation (Institut für Restaurierung, IfR). When Otto Wächter treated the 6th century manuscript the Vienna Dioscorides (Codex medicus grae- cus 1) in 1960, he refused to apply soluble nylon as advised by experts like Plenderleith and Coremans. Instead, he used parchment glue to regenerate the parchment and to consolidate 46 Austrian National Library archive, record 1059/1928. 47 Austrian National Library archive, record 443/1914. 48 Austrian National Library archive, record 259/1920. 49 Smith, 1938, p. 68. Open-Access-Publikation im Sinne der CC-Lizenz BY 4.0
zurück zum  Buch The Vienna Genesis - Material analysis and conservation of a Late Antique illuminated manuscript on purple parchment"
The Vienna Genesis Material analysis and conservation of a Late Antique illuminated manuscript on purple parchment