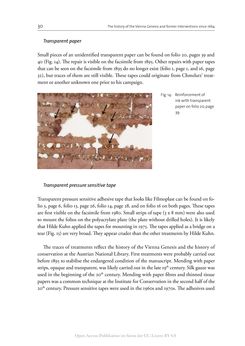 30 The history of the Vienna Genesis and former interventions since 1664 Transparent paper Small pieces of an unidentified transparent paper can be found on folio 20, pages 39 and 40 (Fig. 14). The repair is visible on the facsimile from 1895. Other repairs with paper tapes that can be seen on the facsimile from 1895 do no longer exist (folio 1, page 1, and 16, page 32), but traces of them are still visible. These tapes could originate from Chmelarz’ treat- ment or another unknown one prior to his campaign. Transparent pressure sensitive tape Transparent pressure sensitive adhesive tape that looks like Filmoplast can be found on fo- lio 3, page 6, folio 13, page 26, folio 14, page 28, and on folio 16 on both pages. These tapes are first visible on the facsimile from 1980. Small strips of tape (3 x 8 mm) were also used to mount the folios on the polyacrylate plate (the plate without drilled holes). It is likely that Hilde Kuhn applied the tapes for mounting in 1975. The tapes applied as a bridge on a tear (Fig. 15) are very broad. They appear cruder than the other treatments by Hilde Kuhn. The traces of treatments reflect the history of the Vienna Genesis and the history of conservation at the Austrian National Library. First treatments were probably carried out before 1895 to stabilise the endangered condition of the manuscript. Mending with paper strips, opaque and transparent, was likely carried out in the late 19th century. Silk gauze was used in the beginning of the 20th century. Mending with paper fibres and thinned tissue papers was a common technique at the Institute for Conservation in the second half of the 20th century. Pressure sensitive tapes were used in the 1960s and 1970s. The adhesives used Fig. 14: Reinforcement of ink with transparent paper on folio 20, page 39. Open-Access-Publikation im Sinne der CC-Lizenz BY 4.0
zurück zum  Buch The Vienna Genesis - Material analysis and conservation of a Late Antique illuminated manuscript on purple parchment"
The Vienna Genesis Material analysis and conservation of a Late Antique illuminated manuscript on purple parchment