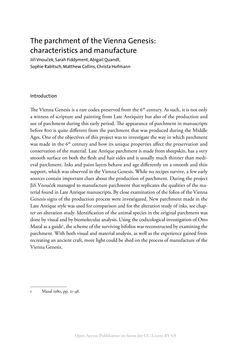 The parchment of the Vienna Genesis: characteristics and manufacture Jiří Vnouček, Sarah Fiddyment, Abigail Quandt, Sophie Rabitsch, Matthew Collins, Christa Hofmann Introduction The Vienna Genesis is a rare codex preserved from the 6th century. As such, it is not only a witness of scripture and painting from Late Antiquity but also of the production and use of parchment during this early period. The appearance of parchment in manuscripts before 800 is quite different from the parchment that was produced during the Middle Ages. One of the objectives of this project was to investigate the way in which parchment was made in the 6th century and how its unique properties affect the preservation and conservation of the material. Late Antique parchment is made from sheepskin, has a very smooth surface on both the flesh and hair sides and is usually much thinner than medi- eval parchment. Inks and paint layers behave and age differently on a smooth and thin support, which was observed in the Vienna Genesis. While no recipes survive, a few early sources contain important clues about the production of parchment. During the project Jiří Vnouček managed to manufacture parchment that replicates the qualities of the ma- terial found in Late Antique manuscripts. By close examination of the folios of the Vienna Genesis signs of the production process were investigated. New parchment made in the Late Antique style was used for comparison and for the alteration study of inks, see chap- ter on alteration study. Identification of the animal species in the original parchment was done by visual and by biomolecular analysis. Using the codicological investigation of Otto Mazal as a guide1, the scheme of the surviving bifolios was reconstructed by examining the parchment. With both visual and material analysis, as well as the experience gained from recreating an ancient craft, more light could be shed on the process of manufacture of the Vienna Genesis. 1 Mazal 1980, pp. 11–48. Open-Access-Publikation im Sinne der CC-Lizenz BY 4.0
zurück zum  Buch The Vienna Genesis - Material analysis and conservation of a Late Antique illuminated manuscript on purple parchment"
The Vienna Genesis Material analysis and conservation of a Late Antique illuminated manuscript on purple parchment