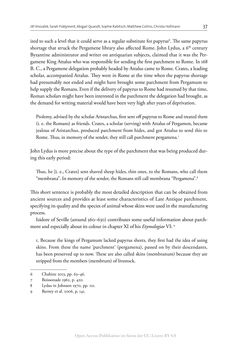 Jiří Vnouček, Sarah Fiddyment, Abigail Quandt, Sophie Rabitsch, Matthew Collins, Christa Hofmann 37 ized to such a level that it could serve as a regular substitute for papyrus6. The same papyrus shortage that struck the Pergamene library also affected Rome. John Lydus, a 6th century Byzantine administrator and writer on antiquarian subjects, claimed that it was the Per- gamene King Attalus who was responsible for sending the first parchment to Rome. In 168 B. C., a Pergamene delegation probably headed by Attalus came to Rome. Crates, a leading scholar, accompanied Attalus. They were in Rome at the time when the papyrus shortage had presumably not ended and might have brought some parchment from Pergamum to help supply the Romans. Even if the delivery of papyrus to Rome had resumed by that time, Roman scholars might have been interested in the parchment the delegation had brought, as the demand for writing material would have been very high after years of deprivation. Ptolemy, advised by the scholar Aristarchus, first sent off papyrus to Rome and treated them (i. e. the Romans) as friends. Crates, a scholar (serving) with Attalus of Pergamon, became jealous of Aristarchus, produced parchment from hides, and got Attalus to send this to Rome. Thus, in memory of the sender, they still call parchment pergamena.7 John Lydus is more precise about the type of the parchment that was being produced dur- ing this early period: Thus, he [i. e., Crates] sent shaved sheep hides, thin ones, to the Romans, who call them “membrana”. In memory of the sender, the Romans still call membrana “Pergamena”.8 This short sentence is probably the most detailed description that can be obtained from ancient sources and provides at least some characteristics of Late Antique parchment, specifying its quality and the species of animal whose skins were used in the manufacturing process. Isidore of Seville (around 560–630) contributes some useful information about parch- ment and especially about its colour in chapter XI of his Etymologiae VI: 9 1. Because the kings of Pergamum lacked papyrus sheets, they first had the idea of using skins. From these the name ‘parchment’ (pergamena), passed on by their descendants, has been preserved up to now. These are also called skins (membranum) because they are stripped from the members (membrum) of livestock. 6 Chahine 2013, pp. 63–46. 7 Boissonade 1962, p. 420. 8 Lydus in Johnson 1970, pp. 121. 9 Barney et al. 2006, p. 141. Open-Access-Publikation im Sinne der CC-Lizenz BY 4.0
zurück zum  Buch The Vienna Genesis - Material analysis and conservation of a Late Antique illuminated manuscript on purple parchment"
The Vienna Genesis Material analysis and conservation of a Late Antique illuminated manuscript on purple parchment