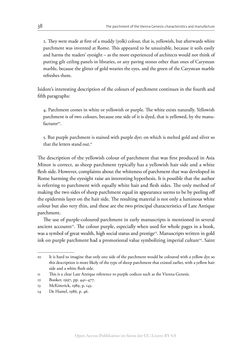 38 The parchment of the Vienna Genesis: characteristics and manufacture 2. They were made at first of a muddy (yolk) colour, that is, yellowish, but afterwards white parchment was invented at Rome. This appeared to be unsuitable, because it soils easily and harms the readers’ eyesight – as the more experienced of architects would not think of putting gilt ceiling panels in libraries, or any paving stones other than ones of Carystean marble, because the glitter of gold wearies the eyes, and the green of the Carystean marble refreshes them. Isidore’s interesting description of the colours of parchment continues in the fourth and fifth paragraphs: 4. Parchment comes in white or yellowish or purple. The white exists naturally. Yellowish parchment is of two colours, because one side of it is dyed, that is yellowed, by the manu- facturer10. 5. But purple parchment is stained with purple dye; on which is melted gold and silver so that the letters stand out.11 The description of the yellowish colour of parchment that was first produced in Asia Minor is correct, as sheep parchment typically has a yellowish hair side and a white flesh side. However, complaints about the whiteness of parchment that was developed in Rome harming the eyesight raise an interesting hypothesis. It is possible that the author is referring to parchment with equally white hair and flesh sides. The only method of making the two sides of sheep parchment equal in appearance seems to be by peeling off the epidermis layer on the hair side. The resulting material is not only a luminous white colour but also very thin, and these are the two principal characteristics of Late Antique parchment. The use of purple-coloured parchment in early manuscripts is mentioned in several ancient accounts12. The colour purple, especially when used for whole pages in a book, was a symbol of great wealth, high social status and prestige13. Manuscripts written in gold ink on purple parchment had a promotional value symbolizing imperial culture14. Saint 10 It is hard to imagine that only one side of the parchment would be coloured with a yellow dye so this description is more likely of the type of sheep parchment that existed earlier, with a yellow hair side and a white flesh side. 11 This is a clear Late Antique reference to purple codices such as the Vienna Genesis. 12 Booker, 1997, pp. 441–477. 13 McKitterick, 1989, p. 143. 14 De Hamel, 1986, p. 46. Open-Access-Publikation im Sinne der CC-Lizenz BY 4.0
zurück zum  Buch The Vienna Genesis - Material analysis and conservation of a Late Antique illuminated manuscript on purple parchment"
The Vienna Genesis Material analysis and conservation of a Late Antique illuminated manuscript on purple parchment