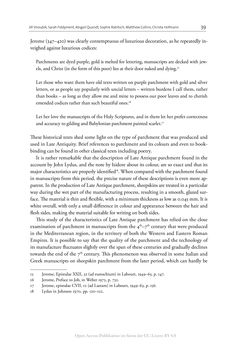 Jiří Vnouček, Sarah Fiddyment, Abigail Quandt, Sophie Rabitsch, Matthew Collins, Christa Hofmann 39 Jerome (347–420) was clearly contemptuous of luxurious decoration, as he repeatedly in- veighed against luxurious codices: Parchments are dyed purple, gold is melted for lettering, manuscripts are decked with jew- els, and Christ (in the form of this poor) lies at their door naked and dying.15 Let those who want them have old texts written on purple parchment with gold and silver letters, or as people say popularly with uncial letters – written burdens I call them, rather than books – as long as they allow me and mine to possess our poor leaves and to cherish emended codices rather than such beautiful ones.16 Let her love the manuscripts of the Holy Scriptures, and in them let her prefer correctness and accuracy to gilding and Babylonian parchment painted scarlet.17 These historical texts shed some light on the type of parchment that was produced and used in Late Antiquity. Brief references to parchment and its colours and even to book- binding can be found in other classical texts including poetry. It is rather remarkable that the description of Late Antique parchment found in the account by John Lydus, and the note by Isidore about its colour, are so exact and that its major characteristics are properly identified18. When compared with the parchment found in manuscripts from this period, the precise nature of these descriptions is even more ap- parent. In the production of Late Antique parchment, sheepskins are treated in a particular way during the wet part of the manufacturing process, resulting in a smooth, glazed sur- face. The material is thin and flexible, with a minimum thickness as low as 0.045 mm. It is white overall, with only a small difference in colour and appearance between the hair and flesh sides, making the material suitable for writing on both sides. This study of the characteristics of Late Antique parchment has relied on the close examination of parchment in manuscripts from the 4th–7th century that were produced in the Mediterranean region, in the territory of both the Western and Eastern Roman Empires. It is possible to say that the quality of the parchment and the technology of its manufacture fluctuates slightly over the span of these centuries and gradually declines towards the end of the 7th century. This phenomenon was observed in some Italian and Greek manuscripts on sheepskin parchment from the later period, which can hardly be 15 Jerome, Epistulae XXII, 32 (ad eustochium) in Labourt, 1949–63, p. 147. 16 Jerome, Preface to Job, in Weber 1975, p. 732. 17 Jerome, epistulae CVII, 12 (ad Laetam) in Labourt, 1949–63, p. 156. 18 Lydus in Johnson 1970, pp. 120–122. Open-Access-Publikation im Sinne der CC-Lizenz BY 4.0
zurück zum  Buch The Vienna Genesis - Material analysis and conservation of a Late Antique illuminated manuscript on purple parchment"
The Vienna Genesis Material analysis and conservation of a Late Antique illuminated manuscript on purple parchment