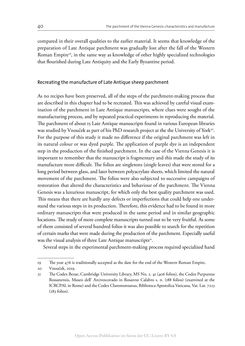 40 The parchment of the Vienna Genesis: characteristics and manufacture compared in their overall qualities to the earlier material. It seems that knowledge of the preparation of Late Antique parchment was gradually lost after the fall of the Western Roman Empire19, in the same way as knowledge of other highly specialized technologies that flourished during Late Antiquity and the Early Byzantine period. Recreating the manufacture of Late Antique sheep parchment As no recipes have been preserved, all of the steps of the parchment-making process that are described in this chapter had to be recreated. This was achieved by careful visual exam- ination of the parchment in Late Antique manuscripts, where clues were sought of the manufacturing process, and by repeated practical experiments in reproducing the material. The parchment of about 15 Late Antique manuscripts found in various European libraries was studied by Vnouček as part of his PhD research project at the the University of York20. For the purpose of this study it made no difference if the original parchment was left in its natural colour or was dyed purple. The application of purple dye is an independent step in the production of the finished parchment. In the case of the Vienna Genesis it is important to remember that the manuscript is fragmentary and this made the study of its manufacture more difficult. The folios are singletons (single leaves) that were stored for a long period between glass, and later between polyacrylate sheets, which limited the natural movement of the parchment. The folios were also subjected to successive campaigns of restoration that altered the characteristics and behaviour of the parchment. The Vienna Genesis was a luxurious manuscript, for which only the best quality parchment was used. This means that there are hardly any defects or imperfections that could help one under- stand the various steps in its production. Therefore, this evidence had to be found in more ordinary manuscripts that were produced in the same period and in similar geographic locations. The study of more complete manuscripts turned out to be very fruitful. As some of them consisted of several hundred folios it was also possible to search for the repetition of certain marks that were made during the production of the parchment. Especially useful was the visual analysis of three Late Antique manuscripts21. Several steps in the experimental parchment-making process required specialized hand 19 The year 476 is traditionally accepted as the date for the end of the Western Roman Empire. 20 Vnouček, 2019. 21 The Codex Bezae, Cambridge University Library, MS Nn. 2. 41 (406 folios), the Codex Purpureus Rossanensis, Museo dell’ Arcivescovado in Rosanno Calabro s. n. (188 folios) (examined at the ICRCPAL in Rome) and the Codex Claromontanus, Biblioteca Apostolica Vaticana, Vat. Lat. 7223 (283 folios). Open-Access-Publikation im Sinne der CC-Lizenz BY 4.0
zurück zum  Buch The Vienna Genesis - Material analysis and conservation of a Late Antique illuminated manuscript on purple parchment"
The Vienna Genesis Material analysis and conservation of a Late Antique illuminated manuscript on purple parchment