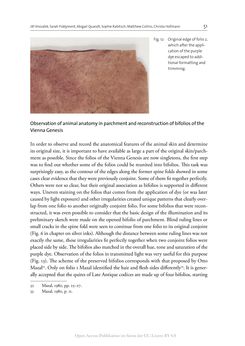 Jiří Vnouček, Sarah Fiddyment, Abigail Quandt, Sophie Rabitsch, Matthew Collins, Christa Hofmann 51 Observation of animal anatomy in parchment and reconstruction of bifolios of the Vienna Genesis In order to observe and record the anatomical features of the animal skin and determine its original size, it is important to have available as large a part of the original skin/parch- ment as possible. Since the folios of the Vienna Genesis are now singletons, the first step was to find out whether some of the folios could be reunited into bifolios. This task was surprisingly easy, as the contour of the edges along the former spine folds showed in some cases clear evidence that they were previously conjoint. Some of them fit together perfectly. Others were not so clear, but their original association as bifolios is supported in different ways. Uneven staining on the folios that comes from the application of dye (or was later caused by light exposure) and other irregularities created unique patterns that clearly over- lap from one folio to another originally conjoint folio. For some bifolios that were recon- structed, it was even possible to consider that the basic design of the illumination and its preliminary sketch were made on the opened bifolio of parchment. Blind ruling lines or small cracks in the spine fold were seen to continue from one folio to its original conjoint (Fig. 6 in chapter on silver inks). Although the distance between some ruling lines was not exactly the same, these irregularities fit perfectly together when two conjoint folios were placed side by side. The bifolios also matched in the overall hue, tone and saturation of the purple dye. Observation of the folios in transmitted light was very useful for this purpose (Fig. 13). The scheme of the preserved bifolios corresponds with that proposed by Otto Mazal32. Only on folio 1 Mazal identified the hair and flesh sides differently33. It is gener- ally accepted that the quires of Late Antique codices are made up of four bifolios, starting 32 Mazal, 1980, pp. 25–27. 33 Mazal, 1980, p. 11. Fig. 12: Original edge of folio 2, which after the appli- cation of the purple dye escaped to addi- tional formatting and trimming. Open-Access-Publikation im Sinne der CC-Lizenz BY 4.0
zurück zum  Buch The Vienna Genesis - Material analysis and conservation of a Late Antique illuminated manuscript on purple parchment"
The Vienna Genesis Material analysis and conservation of a Late Antique illuminated manuscript on purple parchment