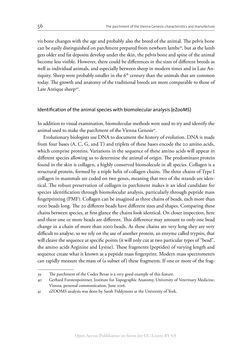 56 The parchment of the Vienna Genesis: characteristics and manufacture vis bone changes with the age and probably also the breed of the animal. The pelvis bone can be easily distinguished on parchment prepared from newborn lambs39, but as the lamb gets older and fat deposits develop under the skin, the pelvis bone and spine of the animal become less visible. However, there could be differences in the sizes of different breeds as well as individual animals, and especially between sheep in modern times and in Late An- tiquity. Sheep were probably smaller in the 6th century than the animals that are common today. The growth and anatomy of the traditional breeds are more comparable to those of Late Antique sheep40. Identification of the animal species with biomolecular analysis (eZooMS) In addition to visual examination, biomolecular methods were used to try and identify the animal used to make the parchment of the Vienna Genesis41. Evolutionary biologists use DNA to document the history of evolution. DNA is made from four bases (A, C, G, and T) and triplets of these bases encode the 20 amino acids, which comprise proteins. Variations in the sequence of these amino acids will appear in different species allowing us to determine the animal of origin. The predominant protein found in the skin is collagen, a highly conserved biomolecule in all species. Collagen is a structural protein, formed by a triple helix of collagen chains. The three chains of Type I collagen in mammals are coded on two genes, meaning that two of the strands are iden- tical. The robust preservation of collagen in parchment makes it an ideal candidate for species identification through biomolecular analysis, particularly through peptide mass fingerprinting (PMF). Collagen can be imagined as three chains of beads, each more than 1000 beads long. The 20 different beads have different sizes and shapes. Comparing these chains between species, at first glance the chains look identical. On closer inspection, here and there one or more beads are different. This difference may amount to only one bead change in a chain of more than 1000 beads. As these chains are very long they are very difficult to analyse, so we rely on the use of another protein, an enzyme called trypsin, that will cleave the sequence at specific points (it will only cut at two particular types of “bead”, the amino acids Arginine and Lysine). These fragments (peptides) of varying length and sequence create what is known as a peptide mass fingerprint. Modern mass spectrometers can rapidly measure the mass of (a subset of) these fragments. If one or more of the frag- 39 The parchment of the Codex Bezae is a very good example of this feature. 40 Gerhard Forstenpointner, Institute for Topographic Anatomy, University of Veterinary Medicine, Vienna, personal communication, June 2016. 41 eZOOMS analysis was done by Sarah Fiddyment at the University of York. Open-Access-Publikation im Sinne der CC-Lizenz BY 4.0
zurück zum  Buch The Vienna Genesis - Material analysis and conservation of a Late Antique illuminated manuscript on purple parchment"
The Vienna Genesis Material analysis and conservation of a Late Antique illuminated manuscript on purple parchment