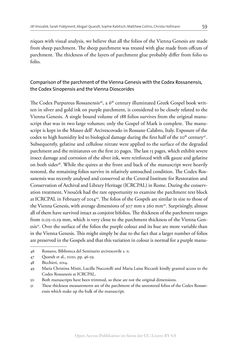 Jiří Vnouček, Sarah Fiddyment, Abigail Quandt, Sophie Rabitsch, Matthew Collins, Christa Hofmann 59 niques with visual analysis, we believe that all the folios of the Vienna Genesis are made from sheep parchment. The sheep parchment was treated with glue made from offcuts of parchment. The thickness of the layers of parchment glue probably differ from folio to folio. Comparison of the parchment of the Vienna Genesis with the Codex Rossanensis, the Codex Sinopensis and the Vienna Dioscorides The Codex Purpureus Rossanensis46, a 6th century illuminated Greek Gospel book writ- ten in silver and gold ink on purple parchment, is considered to be closely related to the Vienna Genesis. A single bound volume of 188 folios survives from the original manu- script that was in two large volumes; only the Gospel of Mark is complete. The manu- script is kept in the Museo dell’ Arcivescovado in Rossano Calabro, Italy. Exposure of the codex to high humidity led to biological damage during the first half of the 20th century47. Subsequently, gelatine and cellulose nitrate were applied to the surface of the degraded parchment and the miniatures on the first 20 pages. The last 15 pages, which exhibit severe insect damage and corrosion of the silver ink, were reinforced with silk gauze and gelatine on both sides48. While the quires at the front and back of the manuscript were heavily restored, the remaining folios survive in relatively untouched condition. The Codex Ros- sanensis was recently analysed and conserved at the Central Institute for Restoration and Conservation of Archival and Library Heritage (ICRCPAL) in Rome. During the conserv- ation treatment, Vnouček had the rare opportunity to examine the parchment text block at ICRCPAL in February of 201449. The folios of the Gospels are similar in size to those of the Vienna Genesis, with average dimensions of 307 mm x 260 mm50. Surprisingly, almost all of them have survived intact as conjoint bifolios. The thickness of the parchment ranges from 0.05–0.19 mm, which is very close to the parchment thickness of the Vienna Gen- esis51. Over the surface of the folios the purple colour and its hue are more variable than in the Vienna Genesis. This might simply be due to the fact that a larger number of folios are preserved in the Gospels and that this variation in colour is normal for a purple manu- 46 Rossano, Biblioteca del Seminario arcivescovile s. n. 47 Quandt et al., 2020, pp. 46-59. 48 Bicchieri, 2014. 49 Maria Christina Misiti, Lucilla Nuccetelli and Maria Luisa Riccardi kindly granted access to the Codex Rossanesis at ICRCPAL. 50 Both manuscripts have been trimmed, so these are not the original dimensions. 51 These thickness measurements are of the parchment of the unrestored folios of the Codex Rossan- ensis which make up the bulk of the manuscript. Open-Access-Publikation im Sinne der CC-Lizenz BY 4.0
zurück zum  Buch The Vienna Genesis - Material analysis and conservation of a Late Antique illuminated manuscript on purple parchment"
The Vienna Genesis Material analysis and conservation of a Late Antique illuminated manuscript on purple parchment