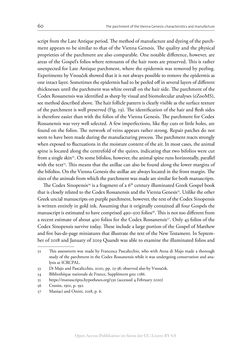 60 The parchment of the Vienna Genesis: characteristics and manufacture script from the Late Antique period. The method of manufacture and dyeing of the parch- ment appears to be similar to that of the Vienna Genesis. The quality and the physical proprieties of the parchment are also comparable. One notable difference, however, are areas of the Gospel’s folios where remnants of the hair roots are preserved. This is rather unexpected for Late Antique parchment, where the epidermis was removed by peeling. Experiments by Vnouček showed that it is not always possible to remove the epidermis as one intact layer. Sometimes the epidermis had to be peeled off in several layers of different thicknesses until the parchment was white overall on the hair side. The parchment of the Codex Rossanensis was identified as sheep by visual and biomolecular analyses (eZooMS), see method described above. The hair follicle pattern is clearly visible as the surface texture of the parchment is well preserved (Fig. 19). The identification of the hair and flesh sides is therefore easier than with the folios of the Vienna Genesis. The parchment for Codex Rossanensis was very well selected. A few imperfections, like flay cuts or little holes, are found on the folios. The network of veins appears rather strong. Repair patches do not seem to have been made during the manufacturing process. The parchment reacts strongly when exposed to fluctuations in the moisture content of the air. In most cases, the animal spine is located along the centrefold of the quires, indicating that two bifolios were cut from a single skin52. On some bifolios, however, the animal spine runs horizontally, parallel with the text53. This means that the axillae can also be found along the lower margins of the bifolios. On the Vienna Genesis the axillae are always located in the front margin. The sizes of the animals from which the parchment was made are similar for both manuscripts. The Codex Sinopensis54 is a fragment of a 6th century illuminated Greek Gospel book that is closely related to the Codex Rossanensis and the Vienna Genesis55. Unlike the other Greek uncial manuscripts on purple parchment, however, the text of the Codex Sinopensis is written entirely in gold ink. Assuming that it originally contained all four Gospels the manuscript is estimated to have comprised 490–500 folios56. This is not too different from a recent estimate of about 400 folios for the Codex Rossanensis57. Only 43 folios of the Codex Sinopensis survive today. These include a large portion of the Gospel of Matthew and five bas-de-page miniatures that illustrate the text of the New Testament. In Septem- ber of 2018 and January of 2019 Quandt was able to examine the illuminated folios and 52 This assessment was made by Francesca Pascalicchio, who with Anna di Majo made a thorough study of the parchment in the Codex Rossanensis while it was undergoing conservation and ana- lysis at ICRCPAL. 53 Di Majo and Pascalicchio, 2020, pp. 25-38; observed also by Vnouček. 54 Bibliothèque nationale de France, Supplément grec 1286. 55 https://manuscripta.hypotheses.org/530 (accessed 4 February 2020) 56 Cronin, 1901, p. 592. 57 Maniaci and Orsini, 2018, p. 6. Open-Access-Publikation im Sinne der CC-Lizenz BY 4.0
zurück zum  Buch The Vienna Genesis - Material analysis and conservation of a Late Antique illuminated manuscript on purple parchment"
The Vienna Genesis Material analysis and conservation of a Late Antique illuminated manuscript on purple parchment