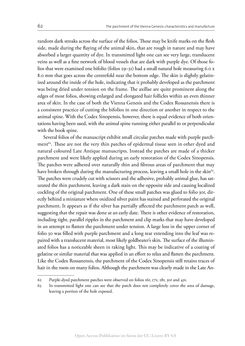 62 The parchment of the Vienna Genesis: characteristics and manufacture random dark streaks across the surface of the folios. These may be knife marks on the flesh side, made during the flaying of the animal skin, that are rough in nature and may have absorbed a larger quantity of dye. In transmitted light one can see very large, translucent veins as well as a fine network of blood vessels that are dark with purple dye. Of those fo- lios that were examined one bifolio (folios 29–31) had a small natural hole measuring 6.0 x 8.0 mm that goes across the centrefold near the bottom edge. The skin is slightly gelatin- ized around the inside of the hole, indicating that it probably developed as the parchment was being dried under tension on the frame. The axillae are quite prominent along the edges of most folios, showing enlarged and elongated hair follicles within an even thinner area of skin. In the case of both the Vienna Genesis and the Codex Rossanensis there is a consistent practice of cutting the bifolios in one direction or another in respect to the animal spine. With the Codex Sinopensis, however, there is equal evidence of both orien- tations having been used, with the animal spine running either parallel to or perpendicular with the book spine. Several folios of the manuscript exhibit small circular patches made with purple parch- ment62. These are not the very thin patches of epidermal tissue seen in other dyed and natural coloured Late Antique manuscripts. Instead the patches are made of a thicker parchment and were likely applied during an early restoration of the Codex Sinopensis. The patches were adhered over naturally thin and fibrous areas of parchment that may have broken through during the manufacturing process, leaving a small hole in the skin63. The patches were crudely cut with scissors and the adhesive, probably animal glue, has sat- urated the thin parchment, leaving a dark stain on the opposite side and causing localized cockling of the original parchment. One of these small patches was glued to folio 30r, dir- ectly behind a miniature where oxidized silver paint has stained and perforated the original parchment. It appears as if the silver has partially affected the parchment patch as well, suggesting that the repair was done at an early date. There is other evidence of restoration, including tight, parallel ripples in the parchment and clip marks that may have developed in an attempt to flatten the parchment under tension. A large loss in the upper corner of folio 30 was filled with purple parchment and a long tear extending into the leaf was re- paired with a translucent material, most likely goldbeater’s skin. The surface of the illumin- ated folios has a noticeable sheen in raking light. This may be indicative of a coating of gelatine or similar material that was applied in an effort to relax and flatten the parchment. Like the Codex Rossanensis, the parchment of the Codex Sinopensis still retains traces of hair in the roots on many folios. Although the parchment was clearly made in the Late An- 62 Purple-dyed parchment patches were observed on folios 16r, 17v, 28r, 30r and 43v. 63 In transmitted light one can see that the patch does not completely cover the area of damage, leaving a portion of the hole exposed. Open-Access-Publikation im Sinne der CC-Lizenz BY 4.0
zurück zum  Buch The Vienna Genesis - Material analysis and conservation of a Late Antique illuminated manuscript on purple parchment"
The Vienna Genesis Material analysis and conservation of a Late Antique illuminated manuscript on purple parchment