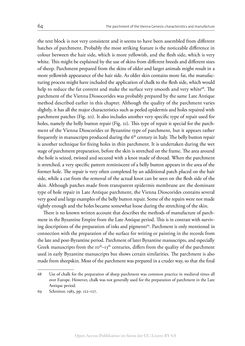 64 The parchment of the Vienna Genesis: characteristics and manufacture the text block is not very consistent and it seems to have been assembled from different batches of parchment. Probably the most striking feature is the noticeable difference in colour between the hair side, which is more yellowish, and the flesh side, which is very white. This might be explained by the use of skins from different breeds and different sizes of sheep. Parchment prepared from the skins of older and larger animals might result in a more yellowish appearance of the hair side. As older skin contains more fat, the manufac- turing process might have included the application of chalk to the flesh side, which would help to reduce the fat content and make the surface very smooth and very white68. The parchment of the Vienna Diosocorides was probably prepared by the same Late Antique method described earlier in this chapter. Although the quality of the parchment varies slightly, it has all the major characteristics such as peeled epidermis and holes repaired with parchment patches (Fig. 20). It also includes another very specific type of repair used for holes, namely the belly button repair (Fig. 21). This type of repair is special for the parch- ment of the Vienna Dioscorides or Byzantine type of parchment, but it appears rather frequently in manuscripts produced during the 6th century in Italy. The belly button repair is another technique for fixing holes in thin parchment. It is undertaken during the wet stage of parchment preparation, before the skin is stretched on the frame. The area around the hole is seized, twisted and secured with a knot made of thread. When the parchment is stretched, a very specific pattern reminiscent of a belly button appears in the area of the former hole. The repair is very often completed by an additional patch placed on the hair side, while a cut from the removal of the actual knot can be seen on the flesh side of the skin. Although patches made from transparent epidermis membrane are the dominant type of hole repair in Late Antique parchment, the Vienna Dioscorides contains several very good and large examples of the belly button repair. Some of the repairs were not made tightly enough and the holes became somewhat loose during the stretching of the skin. There is no known written account that describes the methods of manufacture of parch- ment in the Byzantine Empire from the Late Antique period. This is in contrast with surviv- ing descriptions of the preparation of inks and pigments69. Parchment is only mentioned in connection with the preparation of the surface for writing or painting in the records from the late and post-Byzantine period. Parchment of later Byzantine manuscripts, and especially Greek manuscripts from the 10th–13th centuries, differs from the quality of the parchment used in early Byzantine manuscripts but shows certain similarities. The parchment is also made from sheepskin. Most of the parchment was prepared in a cruder way, so that the final 68 Use of chalk for the preparation of sheep parchment was common practice in medieval times all over Europe. However, chalk was not generally used for the preparation of parchment in the Late Antique period. 69 Schreiner, 1983, pp. 122–127. Open-Access-Publikation im Sinne der CC-Lizenz BY 4.0
zurück zum  Buch The Vienna Genesis - Material analysis and conservation of a Late Antique illuminated manuscript on purple parchment"
The Vienna Genesis Material analysis and conservation of a Late Antique illuminated manuscript on purple parchment