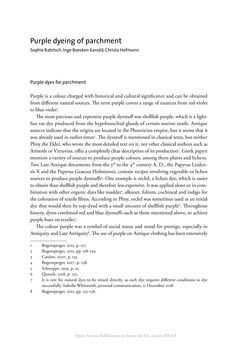 Purple dyeing of parchment Sophie Rabitsch, Inge Boesken Kanold, Christa Hofmann Purple dyes for parchment Purple is a colour charged with historical and cultural significance and can be obtained from different natural sources. The term purple covers a range of nuances from red-violet to blue-violet1. The most precious and expensive purple dyestuff was shellfish purple, which is a light- fast vat dye produced from the hypobranchial glands of certain marine snails. Antique sources indicate that the origins are located in the Phoenician empire, but it seems that it was already used in earlier times2. The dyestuff is mentioned in classical texts, but neither Pliny the Elder, who wrote the most detailed text on it, nor other classical authors such as Aristotle or Vitruvius, offer a completely clear description of its production3. Greek papyri mention a variety of sources to produce purple colours, among them plants and lichens. Two Late Antique documents from the 3rd to the 4th century A. D., the Papyrus Leiden- sis X and the Papyrus Graecus Holmiensis, contain recipes involving vegetable or lichen sources to produce purple dyestuffs4. One example is orchil, a lichen dye, which is easier to obtain than shellfish purple and therefore less expensive. It was applied alone or in com- bination with other organic dyes like madder5, alkanet, folium, cochineal and indigo for the coloration of textile fibres. According to Pliny, orchil was sometimes used as an initial dye that would then be top-dyed with a small amount of shellfish purple6. Throughout history, dyers combined red and blue dyestuffs such as those mentioned above, to achieve purple hues on textiles7. The colour purple was a symbol of social status and stood for prestige, especially in Antiquity and Late Antiquity8. The use of purple on Antique clothing has been extensively 1 Bogensperger, 2015, p. 157. 2 Bogensperger, 2015, pp. 158–159. 3 Cardon, 2007, p. 553. 4 Bogensperger, 2017, p. 238. 5 Schweppe, 1993, p. 25. 6 Quandt, 2018, p. 122. 7 It is rare for natural dyes to be mixed directly, as each dye requires different conditions to dye successfully. Isabella Whitworth, personal communication, 11 December 2018. 8 Bogensperger, 2015, pp. 155–156. Open-Access-Publikation im Sinne der CC-Lizenz BY 4.0
zurück zum  Buch The Vienna Genesis - Material analysis and conservation of a Late Antique illuminated manuscript on purple parchment"
The Vienna Genesis Material analysis and conservation of a Late Antique illuminated manuscript on purple parchment