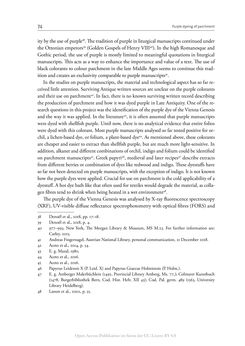 74 Purple dyeing of parchment ity by the use of purple38. The tradition of purple in liturgical manuscripts continued under the Ottonian emperors39 (Golden Gospels of Henry VIII40). In the high Romanesque and Gothic period, the use of purple is mostly limited to meaningful quotations in liturgical manuscripts. This acts as a way to enhance the importance and value of a text. The use of black colorants to colour parchment in the late Middle Ages seems to continue this trad- ition and creates an exclusivity comparable to purple manuscripts41. In the studies on purple manuscripts, the material and technological aspect has so far re- ceived little attention. Surviving Antique written sources are unclear on the purple colorants and their use on parchment42. In fact, there is no known surviving written record describing the production of parchment and how it was dyed purple in Late Antiquity. One of the re- search questions in this project was the identification of the purple dye of the Vienna Genesis and the way it was applied. In the literature43, it is often assumed that purple manuscripts were dyed with shellfish purple. Until now, there is no analytical evidence that entire folios were dyed with this colorant. Most purple manuscripts analysed so far tested positive for or- chil, a lichen-based dye, or folium, a plant-based dye44. As mentioned above, these colorants are cheaper and easier to extract than shellfish purple, but are much more light-sensitive. In addition, alkanet and different combinations of orchil, indigo and folium could be identified on parchment manuscripts45. Greek papyri46, medieval and later recipes47 describe extracts from different berries or combination of dyes like redwood and indigo. These dyestuffs have so far not been detected on purple manuscripts, with the exception of indigo. It is not known how the purple dyes were applied. Crucial for use on parchment is the cold applicability of a dyestuff. A hot dye bath like that often used for textiles would degrade the material, as colla- gen fibres tend to shrink when being heated in a wet environment48. The purple dye of the Vienna Genesis was analysed by X-ray fluorescence spectroscopy (XRF), UV-visible diffuse reflectance spectrophotometry with optical fibres (FORS) and 38 Denoël et al., 2018, pp. 17–18. 39 Denoël et al., 2018, p. 4. 40 977–993, New York, The Morgan Library & Museum, MS M.23. For further information see: Carley. 2013. 41 Andreas Fingernagel, Austrian National Library, personal communication, 21 December 2018. 42 Aceto et al., 2014, p. 54. 43 E. g. Mazal, 1980. 44 Aceto et al., 2016. 45 Aceto et al., 2016. 46 Papyrus Leidensis X (P. Leid. X) and Papyrus Graecus Holmiensis (P. Holm.). 47 E. g. Amberger Malerbüchlein (1492, Provincial Library Amberg, Ms. 77,); Colmarer Kunstbuch (1478, Burgerbibliothek Bern, Cod. Hist. Helv. XII 45); Cod. Pal. germ. 489 (1563, University Library Heidelberg). 48 Larsen et al., 2002, p. 55. Open-Access-Publikation im Sinne der CC-Lizenz BY 4.0
zurück zum  Buch The Vienna Genesis - Material analysis and conservation of a Late Antique illuminated manuscript on purple parchment"
The Vienna Genesis Material analysis and conservation of a Late Antique illuminated manuscript on purple parchment