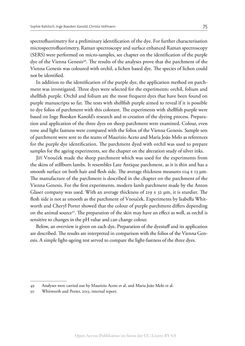 Sophie Rabitsch, Inge Boesken Kanold, Christa Hofmann 75 spectrofluorimetry for a preliminary identification of the dye. For further characterisation microspectrofluorimetry, Raman spectroscopy and surface enhanced Raman spectroscopy (SERS) were performed on micro-samples, see chapter on the identification of the purple dye of the Vienna Genesis49. The results of the analyses prove that the parchment of the Vienna Genesis was coloured with orchil, a lichen based dye. The species of lichen could not be identified. In addition to the identification of the purple dye, the application method on parch- ment was investigated. Three dyes were selected for the experiments: orchil, folium and shellfish purple. Orchil and folium are the most frequent dyes that have been found on purple manuscripts so far. The tests with shellfish purple aimed to reveal if it is possible to dye folios of parchment with this colorant. The experiments with shellfish purple were based on Inge Boesken Kanold’s research and re-creation of the dyeing process. Prepara- tion and application of the three dyes on sheep parchment were examined. Colour, even tone and light fastness were compared with the folios of the Vienna Genesis. Sample sets of parchment were sent to the teams of Maurizio Aceto and Maria João Melo as references for the purple dye identification. The parchment dyed with orchil was used to prepare samples for the ageing experiments, see the chapter on the alteration study of silver inks. Jiří Vnouček made the sheep parchment which was used for the experiments from the skins of stillborn lambs. It resembles Late Antique parchment, as it is thin and has a smooth surface on both hair and flesh side. The average thickness measures 104 ± 13 µm. The manufacture of the parchment is described in the chapter on the parchment of the Vienna Genesis. For the first experiments, modern lamb parchment made by the Anton Glaser company was used. With an average thickness of 219 ± 32 µm, it is sturdier. The flesh side is not as smooth as the parchment of Vnouček. Experiments by Isabella Whit- worth and Cheryl Porter showed that the colour of purple parchment differs depending on the animal source50. The preparation of the skin may have an effect as well, as orchil is sensitive to changes in the pH value and can change colour. Below, an overview is given on each dye. Preparation of the dyestuff and its application are described. The results are interpreted in comparison with the folios of the Vienna Gen- esis. A simple light-ageing test served to compare the light-fastness of the three dyes. 49 Analyses were carried out by Maurizio Aceto et al. and Maria João Melo et al. 50 Whitworth and Porter, 2013, internal report. Open-Access-Publikation im Sinne der CC-Lizenz BY 4.0
zurück zum  Buch The Vienna Genesis - Material analysis and conservation of a Late Antique illuminated manuscript on purple parchment"
The Vienna Genesis Material analysis and conservation of a Late Antique illuminated manuscript on purple parchment