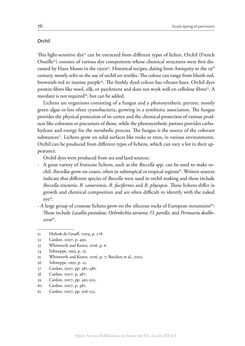 76 Purple dyeing of parchment Orchil This light-sensitive dye51 can be extracted from different types of lichen. Orchil (French Orseille52) consists of various dye components whose chemical structures were first dis- cussed by Hans Musso in the 1950s53. Historical recipes, dating from Antiquity to the 19th century, mostly refer to the use of orchil on textiles. The colour can range from bluish-red, brownish-red to intense purple54. The freshly dyed colour has vibrant hues. Orchil dyes protein fibres like wool, silk, or parchment and does not work well on cellulose fibres55. A mordant is not required56, but can be added. Lichens are organisms consisting of a fungus and a photosynthetic partner, mostly green algae or less often cyanobacteria, growing in a symbiotic association. The fungus provides the physical protection of its cortex and the chemical protection of various prod- ucts like colorants or precursors of those, while the photosynthetic partner provides carbo- hydrate and energy for the metabolic process. The fungus is the source of the colorant substances57. Lichens grow on solid surfaces like rocks or trees, in various environments. Orchil can be produced from different types of lichens, which can vary a lot in their ap- pearance. Orchil dyes were produced from sea and land sources: - A great variety of fruticose lichens, such as the Roccella spp. can be used to make or- chil. Roccellae grow on coasts, often in subtropical or tropical regions58. Written sources indicate that different species of Roccella were used in orchil making and these include Roccella tinctoria, R. canariensis, R. fuciformis and R. phycopsis. These lichens differ in growth and chemical composition and are often difficult to identify with the naked eye59. - A large group of crustose lichens grow on the siliceous rocks of European mountains60: These include Lasallia pustulata, Ochrolechia tartarea, O. parella, and Pertusaria dealbe- scens61. 51 Hofenk de Graaff, 2004, p. 278. 52 Cardon, 2007, p. 490. 53 Whitworth and Koren, 2016, p. 6. 54 Schweppe, 1993, p. 25. 55 Whitworth and Koren, 2016, p. 7; Beecken et al., 2003. 56 Schweppe, 1993, p. 25. 57 Cardon, 2007, pp. 485–486. 58 Cardon, 2007, p. 487. 59 Cardon, 2007, pp. 495–505. 60 Cardon, 2007, p. 487. 61 Cardon, 2007, pp. 506–513. Open-Access-Publikation im Sinne der CC-Lizenz BY 4.0
zurück zum  Buch The Vienna Genesis - Material analysis and conservation of a Late Antique illuminated manuscript on purple parchment"
The Vienna Genesis Material analysis and conservation of a Late Antique illuminated manuscript on purple parchment