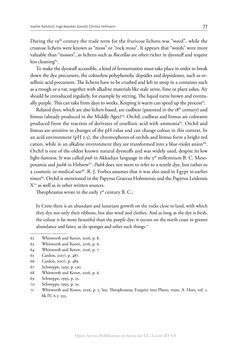 Sophie Rabitsch, Inge Boesken Kanold, Christa Hofmann 77 During the 19th century the trade term for the fruticose lichens was “weed”, while the crustose lichens were known as “moss” or “rock moss”. It appears that “weeds” were more valuable than “mosses”, as lichens such as Roccellae are often richer in dyestuff and require less cleaning62. To make the dyestuff accessible, a kind of fermentation must take place in order to break down the dye precursors, the colourless polyphenolic depsides and depsidones, such as or- sellinic acid precursors. The lichens have to be crushed and left to steep in a container such as a trough or a vat, together with alkaline materials like stale urine, lime or plant ashes. Air should be introduced regularly, for example by stirring. The liquid turns brown and eventu- ally purple. This can take from days to weeks. Keeping it warm can speed up the process63. Related dyes, which are also lichen-based, are cudbear (patented in the 18th century) and litmus (already produced in the Middle Ages)64. Orchil, cudbear and litmus are colorants produced from the reaction of derivates of orsellinic acid with ammonia65. Orchil and litmus are sensitive to changes of the pH value and can change colour in this context. In an acid environment (pH 2.5), the chromophores of orchils and litmus form a bright red cation, while in an alkaline environment they are transformed into a blue-violet anion66. Orchil is one of the oldest known natural dyestuffs and was widely used, despite its low light-fastness. It was called puh in Akkadian language in the 3rd millennium B. C. Meso- potamia and puhk in Hebrew67. Puhk does not seem to refer to a textile dye, but rather to a cosmetic or medical use68. R. J. Forbes assumes that it was also used in Egypt in earlier times69. Orchil is mentioned in the Papyrus Graecus Holmiensis and the Papyrus Leidensis X70 as well as in other written sources. Theophrastus wrote in the early 3rd century B. C.: In Crete there is an abundant and luxuriant growth on the rocks close to land, with which they dye not only their ribbons, but also wool and clothes. And as long as the dye is fresh, the colour is far more beautiful than the purple dye; it occurs on the north coast in greater abundance and fairer, as do sponges and other such things.71 62 Whitworth and Koren, 2016, p. 8. 63 Whitworth and Koren, 2016, p. 6. 64 Whitworth and Koren, 2016, p. 7. 65 Cardon, 2007, p. 487. 66 Cardon, 2007, p. 489. 67 Schweppe, 1993, p. 530. 68 Whitworth and Koren, 2016, p. 6. 69 Schweppe, 1993, p. 25. 70 Schweppe, 1993, p. 25. 71 Whitworth and Koren, 2016, p. 5. See: Theophrastus, Enquiry into Plants, trans. A. Hort, vol. 1, bk IV, 6.5: 333. Open-Access-Publikation im Sinne der CC-Lizenz BY 4.0
zurück zum  Buch The Vienna Genesis - Material analysis and conservation of a Late Antique illuminated manuscript on purple parchment"
The Vienna Genesis Material analysis and conservation of a Late Antique illuminated manuscript on purple parchment