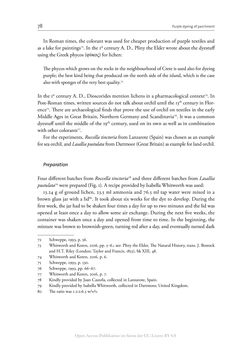 78 Purple dyeing of parchment In Roman times, the colorant was used for cheaper production of purple textiles and as a lake for paintings72. In the 1st century A. D., Pliny the Elder wrote about the dyestuff using the Greek phycos (φύκος) for lichen: The phycos which grows on the rocks in the neighbourhood of Crete is used also for dyeing purple; the best kind being that produced on the north side of the island, which is the case also with sponges of the very best quality.73 In the 1st century A. D., Dioscorides mention lichens in a pharmacological context74. In Post-Roman times, written sources do not talk about orchil until the 13th century in Flor- ence75. There are archaeological finds that prove the use of orchil on textiles in the early Middle Ages in Great Britain, Northern Germany and Scandinavia76. It was a common dyestuff until the middle of the 19th century, used on its own as well as in combination with other colorants77. For the experiments, Roccella tinctoria from Lanzarote (Spain) was chosen as an example for sea orchil, and Lasallia pustulata from Dartmoor (Great Britain) as example for land orchil. Preparation Four different batches from Roccella tinctoria78 and three different batches from Lasallia pustulata79 were prepared (Fig. 1). A recipe provided by Isabella Whitworth was used: 13.24 g of ground lichen, 23.5 ml ammonia and 76.5 ml tap water were mixed in a brown glass jar with a lid80. It took about six weeks for the dye to develop. During the first week, the jar had to be shaken four times a day for up to two minutes and the lid was opened at least once a day to allow some air exchange. During the next five weeks, the container was shaken once a day and opened from time to time. In the beginning, the mixture was brown to brownish-green, turning red after a day, and eventually turned dark 72 Schweppe, 1993, p. 56. 73 Whitworth and Koren, 2016, pp. 5–6.; see: Pliny the Elder, The Natural History, trans. J. Bostock and H.T. Riley (London: Taylor and Francis, 1855), bk XIII, 48. 74 Whitworth and Koren, 2016, p. 6. 75 Schweppe, 1993, p. 530. 76 Schweppe, 1993, pp. 66–67. 77 Whitworth and Koren, 2016, p. 7. 78 Kindly provided by Juan Cazorla, collected in Lanzarote, Spain. 79 Kindly provided by Isabella Whitworth, collected in Dartmoor, United Kingdom. 80 The ratio was 1.2:2:6.5 w/v/v. Open-Access-Publikation im Sinne der CC-Lizenz BY 4.0
zurück zum  Buch The Vienna Genesis - Material analysis and conservation of a Late Antique illuminated manuscript on purple parchment"
The Vienna Genesis Material analysis and conservation of a Late Antique illuminated manuscript on purple parchment