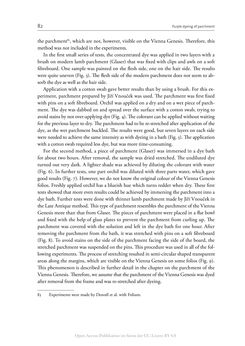 82 Purple dyeing of parchment the parchment83, which are not, however, visible on the Vienna Genesis. Therefore, this method was not included in the experiments. In the first small series of tests, the concentrated dye was applied in two layers with a brush on modern lamb parchment (Glaser) that was fixed with clips and awls on a soft fibreboard. One sample was painted on the flesh side, one on the hair side. The results were quite uneven (Fig. 3). The flesh side of the modern parchment does not seem to ab- sorb the dye as well as the hair side. Application with a cotton swab gave better results than by using a brush. For this ex- periment, parchment prepared by Jiří Vnouček was used. The parchment was first fixed with pins on a soft fibreboard. Orchil was applied on a dry and on a wet piece of parch- ment. The dye was dabbed on and spread over the surface with a cotton swab, trying to avoid stains by not over-applying dye (Fig. 4). The colorant can be applied without waiting for the previous layer to dry. The parchment had to be re-stretched after application of the dye, as the wet parchment buckled. The results were good, but seven layers on each side were needed to achieve the same intensity as with dyeing in a bath (Fig. 5). The application with a cotton swab required less dye, but was more time-consuming. For the second method, a piece of parchment (Glaser) was immersed in a dye bath for about two hours. After removal, the sample was dried stretched. The undiluted dye turned out very dark. A lighter shade was achieved by diluting the colorant with water (Fig. 6). In further tests, one part orchil was diluted with three parts water, which gave good results (Fig. 7). However, we do not know the original colour of the Vienna Genesis folios. Freshly applied orchil has a blueish hue which turns redder when dry. These first tests showed that more even results could be achieved by immersing the parchment into a dye bath. Further tests were done with thinner lamb parchment made by Jiří Vnouček in the Late Antique method. This type of parchment resembles the parchment of the Vienna Genesis more than that from Glaser. The pieces of parchment were placed in a flat bowl and fixed with the help of glass plates to prevent the parchment from curling up. The parchment was covered with the solution and left in the dye bath for one hour. After removing the parchment from the bath, it was stretched with pins on a soft fibreboard (Fig. 8). To avoid stains on the side of the parchment facing the side of the board, the stretched parchment was suspended on the pins. This procedure was used in all of the fol- lowing experiments. The process of stretching resulted in semi-circular shaped transparent areas along the margins, which are visible on the Vienna Genesis on some folios (Fig. 9). This phenomenon is described in further detail in the chapter on the parchment of the Vienna Genesis. Therefore, we assume that the parchment of the Vienna Genesis was dyed after removal from the frame and was re-stretched after dyeing. 83 Experiments were made by Denoël et al. with Folium. Open-Access-Publikation im Sinne der CC-Lizenz BY 4.0
zurück zum  Buch The Vienna Genesis - Material analysis and conservation of a Late Antique illuminated manuscript on purple parchment"
The Vienna Genesis Material analysis and conservation of a Late Antique illuminated manuscript on purple parchment