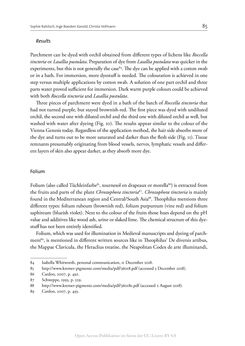 Sophie Rabitsch, Inge Boesken Kanold, Christa Hofmann 85 Results Parchment can be dyed with orchil obtained from different types of lichens like Roccella tinctoria or Lasallia pustulata. Preparation of dye from Lasallia pustulata was quicker in the experiments, but this is not generally the case84. The dye can be applied with a cotton swab or in a bath. For immersion, more dyestuff is needed. The colouration is achieved in one step versus multiple applications by cotton swab. A solution of one part orchil and three parts water proved sufficient for immersion. Dark warm purple colours could be achieved with both Roccella tinctoria and Lasallia pustulata. Three pieces of parchment were dyed in a bath of the batch of Roccella tinctoria that had not turned purple, but stayed brownish-red. The first piece was dyed with undiluted orchil, the second one with diluted orchil and the third one with diluted orchil as well, but washed with water after dyeing (Fig. 10). The results appear similar to the colour of the Vienna Genesis today. Regardless of the application method, the hair side absorbs more of the dye and turns out to be more saturated and darker than the flesh side (Fig. 11). Tissue remnants presumably originating from blood vessels, nerves, lymphatic vessels and differ- ent layers of skin also appear darker, as they absorb more dye. Folium Folium (also called Tüchleinfarbe85, tournesol en drapeaux or morella86) is extracted from the fruits and parts of the plant Chrozophora tinctoria87. Chrozophora tinctoria is mainly found in the Mediterranean region and Central/South Asia88. Theophilus mentions three different types: folium rubeum (brownish red), folium purpureum (vine red) and folium saphireum (blueish violet). Next to the colour of the fruits those hues depend on the pH value and additives like wood ash, urine or slaked lime. The chemical structure of this dye- stuff has not been entirely identified. Folium, which was used for illumination in Medieval manuscripts and dyeing of parch- ment89, is mentioned in different written sources like in Theophilus‘ De diversis artibus, the Mappae Clavicula, the Heraclius treatise, the Neapolitan Codex de arte illuminandi, 84 Isabella Whitworth, personal communication, 11 December 2018. 85 http://www.kremer-pigmente.com/media/pdf/36018.pdf (accessed 5 December 2018). 86 Cardon, 2007, p. 492. 87 Schweppe, 1993, p. 529. 88 http://www.kremer-pigmente.com/media/pdf/36018e.pdf (accessed 2 August 2018). 89 Cardon, 2007, p. 493. Open-Access-Publikation im Sinne der CC-Lizenz BY 4.0
zurück zum  Buch The Vienna Genesis - Material analysis and conservation of a Late Antique illuminated manuscript on purple parchment"
The Vienna Genesis Material analysis and conservation of a Late Antique illuminated manuscript on purple parchment