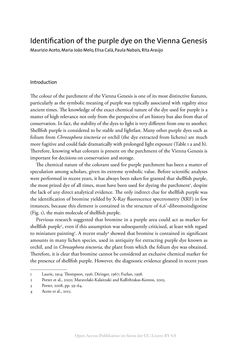 Identification of the purple dye on the Vienna Genesis Maurizio Aceto, Maria João Melo, Elisa Calà, Paula Nabais, Rita Araújo Introduction The colour of the parchment of the Vienna Genesis is one of its most distinctive features, particularly as the symbolic meaning of purple was typically associated with regality since ancient times. The knowledge of the exact chemical nature of the dye used for purple is a matter of high relevance not only from the perspective of art history but also from that of conservation. In fact, the stability of the dyes to light is very different from one to another. Shellfish purple is considered to be stable and lightfast. Many other purple dyes such as folium from Chrozophora tinctoria or orchil (the dye extracted from lichens) are much more fugitive and could fade dramatically with prolonged light exposure (Table 1 a and b). Therefore, knowing what colorant is present on the parchment of the Vienna Genesis is important for decisions on conservation and storage. The chemical nature of the colorant used for purple parchment has been a matter of speculation among scholars, given its extreme symbolic value. Before scientific analyses were performed in recent years, it has always been taken for granted that shellfish purple, the most prized dye of all times, must have been used for dyeing the parchment1, despite the lack of any direct analytical evidence. The only indirect clue for shellfish purple was the identification of bromine yielded by X-Ray fluorescence spectrometry (XRF) in few instances, because this element is contained in the structure of 6,6’-dibromoindigotine (Fig. 1), the main molecule of shellfish purple. Previous research suggested that bromine in a purple area could act as marker for shellfish purple2, even if this assumption was subsequently criticised, at least with regard to miniature painting3. A recent study4 showed that bromine is contained in significant amounts in many lichen species, used in antiquity for extracting purple dye known as orchil, and in Chrozophora tinctoria, the plant from which the folium dye was obtained. Therefore, it is clear that bromine cannot be considered an exclusive chemical marker for the presence of shellfish purple. However, the diagnostic evidence gleaned in recent years 1 Laurie, 1914; Thompson, 1956; Diringer, 1967; Furlan, 1998. 2 Porter et al., 2002; Maravelaki-Kalaitzaki and Kallithrakas-Kontos, 2003. 3 Porter, 2008, pp. 59–64. 4 Aceto et al., 2015. Open-Access-Publikation im Sinne der CC-Lizenz BY 4.0
zurück zum  Buch The Vienna Genesis - Material analysis and conservation of a Late Antique illuminated manuscript on purple parchment"
The Vienna Genesis Material analysis and conservation of a Late Antique illuminated manuscript on purple parchment