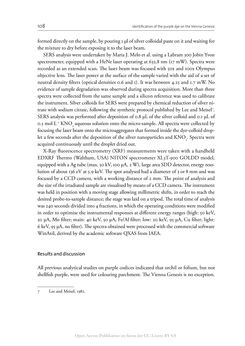 108 Identification of the purple dye on the Vienna Genesis formed directly on the sample, by pouring 1 µl of silver colloidal paste on it and waiting for the mixture to dry before exposing it to the laser beam. SERS analysis were undertaken by Maria J. Melo et al. using a Labram 300 Jobin Yvon spectrometer, equipped with a HeNe laser operating at 632,8 nm (17 mW). Spectra were recorded as an extended scan. The laser beam was focused with 50x and 100x Olympus objective lens. The laser power at the surface of the sample varied with the aid of a set of neutral density filters (optical densities 0.6 and 1). It was between 4.25 and 1.7 mW. No evidence of sample degradation was observed during spectra acquisition. More than three spectra were collected from the same sample and a silicon reference was used to calibrate the instrument. Silver colloids for SERS were prepared by chemical reduction of silver ni- trate with sodium citrate, following the synthetic protocol published by Lee and Meisel7. SERS analysis was performed after deposition of 0.8 µL of the silver colloid and 0.1 µL of 0.5 mol L−1 KNO3 aqueous solution onto the micro-sample. All spectra were collected by focusing the laser beam onto the microaggregates that formed inside the dye-colloid drop- let a few seconds after the deposition of the silver nanoparticles and KNO3. Spectra were acquired continuously until the droplet dried out. X-Ray fluorescence spectrometry (XRF) measurements were taken with a handheld EDXRF Thermo (Waltham, USA) NITON spectrometer XL3T-900 GOLDD model, equipped with a Ag tube (max. 50 kV, 100 µA, 2 W), large area SDD detector, energy reso- lution of about 136 eV at 5.9 keV. The spot analysed had a diameter of 3 or 8 mm and was focused by a CCD camera, with a working distance of 2 mm. The point of analysis and the size of the irradiated sample are visualised by means of a CCD camera. The instrument was held in position with a moving stage allowing millimetric shifts, in order to reach the desired probe-to-sample distance; the stage was laid on a tripod. The total time of analysis was 240 seconds divided into 4 fractions, in which the operating conditions were modified in order to optimise the instrumental responses at different energy ranges (high: 50 keV, 50 µA, Mo filter; main: 40 keV, 50 µA, Fe/Al filter; low: 20 keV, 95 µA, Cu filter; light: 6 keV, 95 µA, no filter). The spectra obtained were processed with the commercial software WinAxil, derived by the academic software QXAS from IAEA. Results and discussion All previous analytical studies on purple codices indicated that orchil or folium, but not shellfish purple, were used for colouring parchment. The Vienna Genesis is no exception. 7 Lee and Meisel, 1982. Open-Access-Publikation im Sinne der CC-Lizenz BY 4.0
zurück zum  Buch The Vienna Genesis - Material analysis and conservation of a Late Antique illuminated manuscript on purple parchment"
The Vienna Genesis Material analysis and conservation of a Late Antique illuminated manuscript on purple parchment