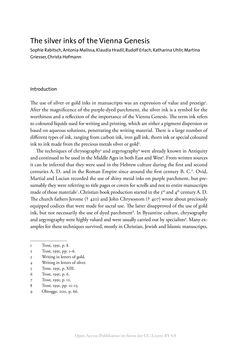 The silver inks of the Vienna Genesis Sophie Rabitsch, Antonia Malissa, Klaudia Hradil, Rudolf Erlach, Katharina Uhlir, Martina Griesser, Christa Hofmann Introduction The use of silver or gold inks in manuscripts was an expression of value and prestige1. After the magnificence of the purple-dyed parchment, the silver ink is a symbol for the worthiness and a reflection of the importance of the Vienna Genesis. The term ink refers to coloured liquids used for writing and printing, which are either a pigment dispersion or based on aqueous solutions, penetrating the writing material. There is a large number of different types of ink, ranging from carbon ink, iron gall ink, thorn ink or special coloured ink to ink made from the precious metals silver or gold2. The techniques of chrysography3 and argyrography4 were already known in Antiquity and continued to be used in the Middle Ages in both East and West5. From written sources it can be inferred that they were used in the Hebrew culture during the first and second centuries A. D. and in the Roman Empire since around the first century B. C.6. Ovid, Martial and Lucian recorded the use of shiny metal inks on purple parchment, but pre- sumably they were referring to title pages or covers for scrolls and not to entire manuscripts made of those materials7. Christian book production started in the 3rd and 4th century A. D. The church fathers Jerome († 420) and John Chrysostom († 407) wrote about preciously equipped codices that were made for sacral use. The latter disapproved of the use of gold ink, but not necessarily the use of dyed parchment8. In Byzantine culture, chrysography and argyrography were highly valued and were usually carried out by specialists9. Many ex- amples for these techniques survived, mostly in Christian, Jewish and Islamic manuscripts, 1 Trost, 1991, p. 8. 2 Trost, 1991, pp. 1–6. 3 Writing in letters of gold. 4 Writing in letters of silver. 5 Trost, 1991, p. XIII. 6 Trost, 1991, p. 6. 7 Trost, 1991, p. 12. 8 Trost, 1991, pp. 12–13. 9 Oltrogge, 2011, p. 66. Open-Access-Publikation im Sinne der CC-Lizenz BY 4.0
zurück zum  Buch The Vienna Genesis - Material analysis and conservation of a Late Antique illuminated manuscript on purple parchment"
The Vienna Genesis Material analysis and conservation of a Late Antique illuminated manuscript on purple parchment