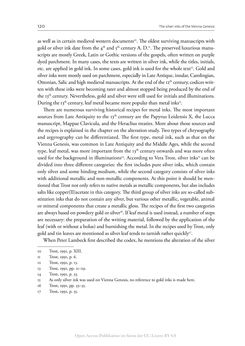 120 The silver inks of the Vienna Genesis as well as in certain medieval western documents10. The oldest surviving manuscripts with gold or silver ink date from the 4th and 5th century A. D.11. The preserved luxurious manu- scripts are mostly Greek, Latin or Gothic versions of the gospels, often written on purple dyed parchment. In many cases, the texts are written in silver ink, while the titles, initials, etc. are applied in gold ink. In some cases, gold ink is used for the whole text12. Gold and silver inks were mostly used on parchment, especially in Late Antique, insular, Carolingian, Ottonian, Salic and high medieval manuscripts. At the end of the 12th century, codices writ- ten with these inks were becoming rarer and almost stopped being produced by the end of the 13th century. Nevertheless, gold and silver were still used for initials and illuminations. During the 13th century, leaf metal became more popular than metal inks13. There are numerous surviving historical recipes for metal inks. The most important sources from Late Antiquity to the 13th century are the Papyrus Leidensis X, the Lucca manuscript, Mappae Clavicula, and the Heraclius treaties. More about those sources and the recipes is explained in the chapter on the alteration study. Two types of chrysography and argyrography can be differentiated. The first type, metal ink, such as that on the Vienna Genesis, was common in Late Antiquity and the Middle Ages, while the second type, leaf metal, was more important from the 13th century onwards and was more often used for the background in illuminations14. According to Vera Trost, silver inks15 can be divided into three different categories: the first includes pure silver inks, which contain only silver and some binding medium, while the second category consists of silver inks with additional metallic and non-metallic components. At this point it should be men- tioned that Trost not only refers to native metals as metallic components, but also includes salts like copper(II)acetate in this category. The third group of silver inks are so-called sub- stitution inks that do not contain any silver, but various other metallic, vegetable, animal or mineral components that create a metallic gloss. The recipes of the first two categories are always based on powdery gold or silver16. If leaf metal is used instead, a number of steps are necessary: the preparation of the writing material, followed by the application of the leaf (with or without a bolus) and burnishing the metal. In the recipes used by Trost, only gold and tin leaves are mentioned as silver leaf tends to tarnish rather quickly17. When Peter Lambeck first described the codex, he mentions the alteration of the silver 10 Trost, 1991, p. XIII. 11 Trost, 1991, p. 6. 12 Trost, 1991, p. 13. 13 Trost, 1991, pp. 11–29. 14 Trost, 1991, p. 33. 15 As only silver ink was used on Vienna Genesis, no reference to gold inks is made here. 16 Trost, 1991, pp. 33–35. 17 Trost, 1991, p. 35. Open-Access-Publikation im Sinne der CC-Lizenz BY 4.0
zurück zum  Buch The Vienna Genesis - Material analysis and conservation of a Late Antique illuminated manuscript on purple parchment"
The Vienna Genesis Material analysis and conservation of a Late Antique illuminated manuscript on purple parchment