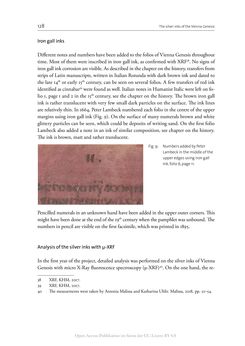 128 The silver inks of the Vienna Genesis Iron gall inks Different notes and numbers have been added to the folios of Vienna Genesis throughout time. Most of them were inscribed in iron gall ink, as confirmed with XRF38. No signs of iron gall ink corrosion are visible. As described in the chapter on the history, transfers from strips of Latin manuscripts, written in Italian Rotunda with dark brown ink and dated to the late 14th or early 15th century, can be seen on several folios. A few transfers of red ink identified as cinnabar39 were found as well. Italian notes in Humanist Italic were left on fo- lio 1, page 1 and 2 in the 15th century, see the chapter on the history. The brown iron gall ink is rather translucent with very few small dark particles on the surface. The ink lines are relatively thin. In 1664, Peter Lambeck numbered each folio in the centre of the upper margins using iron gall ink (Fig. 9). On the surface of many numerals brown and white glittery particles can be seen, which could be deposits of writing sand. On the first folio Lambeck also added a note in an ink of similar composition, see chapter on the history. The ink is brown, matt and rather translucent. Pencilled numerals in an unknown hand have been added in the upper outer corners. This might have been done at the end of the 19th century when the pamphlet was unbound. The numbers in pencil are visible on the first facsimile, which was printed in 1895. Analysis of the silver inks with µ-XRF In the first year of the project, detailed analysis was performed on the silver inks of Vienna Genesis with micro X-Ray fluorescence spectroscopy (µ-XRF)40. On the one hand, the re- 38 XRF, KHM, 2017. 39 XRF, KHM, 2017. 40 The measurments were taken by Antonia Malissa and Katharina Uhlir. Malissa, 2018, pp. 52–54. Fig. 9: Numbers added by Peter Lambeck in the middle of the upper edges using iron gall ink, folio 6, page 11. Open-Access-Publikation im Sinne der CC-Lizenz BY 4.0
zurück zum  Buch The Vienna Genesis - Material analysis and conservation of a Late Antique illuminated manuscript on purple parchment"
The Vienna Genesis Material analysis and conservation of a Late Antique illuminated manuscript on purple parchment