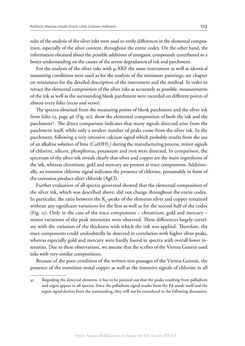 Rabitsch, Malissa, Hradil, Erlach, Uhlir, Griesser, Hofmann 129 sults of the analysis of the silver inks were used to verify differences in the elemental compos- ition, especially of the silver content, throughout the entire codex. On the other hand, the information obtained about the possible additions of inorganic compounds contributed to a better understanding on the causes of the severe degradation of ink and parchment. For the analysis of the silver inks with µ-XRF the same instrument as well as identical measuring conditions were used as for the analysis of the miniature paintings, see chapter on miniatures for the detailed description of the instrument and the method. In order to retrace the elemental composition of the silver inks as accurately as possible, measurements of the ink as well as the surrounding blank parchment were recorded on different points of almost every folio (recto and verso). The spectra obtained from the measuring points of blank parchment and the silver ink from folio 23, page 46 (Fig. 10), show the elemental composition of both the ink and the parchment41. The direct comparison indicates that many signals detected arise from the parchment itself, while only a modest number of peaks come from the silver ink. In the parchment, following a very intensive calcium signal which probably results from the use of an alkaline solution of lime (Ca(OH)2) during the manufacturing process, minor signals of chlorine, silicon, phosphorus, potassium and iron were detected. In comparison, the spectrum of the silver ink reveals clearly that silver and copper are the main ingredients of the ink, whereas chromium, gold and mercury are present as trace components. Addition- ally, an intensive chlorine signal indicates the presence of chlorine, presumably in form of the corrosion product silver chloride (AgCl). Further evaluation of all spectra generated showed that the elemental composition of the silver ink, which was described above, did not change throughout the entire codex. In particular, the ratio between the K α -peaks of the elements silver and copper remained without any significant variations for the first as well as for the second half of the codex (Fig. 11). Only in the case of the trace components – chromium, gold and mercury – minor variations of the peak intensities were observed. These differences largely correl- ate with the variation of the thickness with which the ink was applied. Therefore, the trace components could undoubtedly be detected in correlation with higher silver peaks, whereas especially gold and mercury were hardly found in spectra with overall lower in- tensities. Due to these observations, we assume that the scribes of the Vienna Genesis used inks with very similar compositions. Because of the poor condition of the written text passages of the Vienna Genesis, the presence of the transition metal copper as well as the intensive signals of chlorine in all 41 Regarding the detected elements, it has to be pointed out that the peaks resulting from palladium and argon appear in all spectra. Since the palladium signal results from the Pd anode itself and the argon signal derives from the surrounding, they will not be considered in the following discussion. Open-Access-Publikation im Sinne der CC-Lizenz BY 4.0
zurück zum  Buch The Vienna Genesis - Material analysis and conservation of a Late Antique illuminated manuscript on purple parchment"
The Vienna Genesis Material analysis and conservation of a Late Antique illuminated manuscript on purple parchment