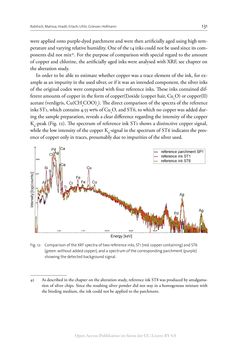 Rabitsch, Malissa, Hradil, Erlach, Uhlir, Griesser, Hofmann 131 were applied onto purple-dyed parchment and were then artificially aged using high tem- perature and varying relative humidity. One of the 14 inks could not be used since its com- ponents did not mix42. For the purpose of comparison with special regard to the amount of copper and chlorine, the artificially aged inks were analysed with XRF, see chapter on the alteration study. In order to be able to estimate whether copper was a trace element of the ink, for ex- ample as an impurity in the used silver, or if it was an intended component, the silver inks of the original codex were compared with four reference inks. These inks contained dif- ferent amounts of copper in the form of copper(I)oxide (copper hair, Cu2O) or copper(II) acetate (verdigris, Cu(CH3COO)2). The direct comparison of the spectra of the reference inks ST1, which contains 4.55 wt% of Cu2O, and ST6, to which no copper was added dur- ing the sample preparation, reveals a clear difference regarding the intensity of the copper K α -peak (Fig. 12). The spectrum of reference ink ST1 shows a distinctive copper signal, while the low intensity of the copper K α -signal in the spectrum of ST6 indicates the pres- ence of copper only in traces, presumably due to impurities of the silver used. 42 As described in the chapter on the alteration study, reference ink ST8 was produced by amalgama- tion of silver chips. Since the resulting silver powder did not stay in a homogenous mixture with the binding medium, the ink could not be applied to the parchment. Fig. 12: Comparison of the XRF spectra of two reference inks, ST1 (red: copper containing) and ST6 (green: without added copper), and a spectrum of the corresponding parchment (purple) showing the detected background signal. Open-Access-Publikation im Sinne der CC-Lizenz BY 4.0
zurück zum  Buch The Vienna Genesis - Material analysis and conservation of a Late Antique illuminated manuscript on purple parchment"
The Vienna Genesis Material analysis and conservation of a Late Antique illuminated manuscript on purple parchment