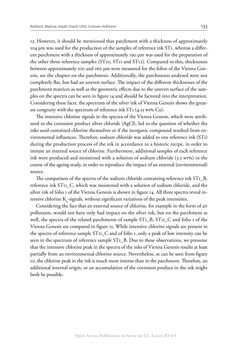 Rabitsch, Malissa, Hradil, Erlach, Uhlir, Griesser, Hofmann 133 13. However, it should be mentioned that parchment with a thickness of approximately 104 µm was used for the production of the samples of reference ink ST1, whereas a differ- ent parchment with a thickness of approximately 190 µm was used for the preparation of the other three reference samples (ST10, ST11 and ST12). Compared to this, thicknesses between approximately 100 and 160 µm were measured for the folios of the Vienna Gen- esis, see the chapter on the parchment. Additionally, the parchments analysed were not completely flat, but had an uneven surface. The impact of the different thicknesses of the parchment matrices as well as the geometric effects due to the uneven surface of the sam- ples on the spectra can be seen in figure 14 and should be factored into the interpretation. Considering these facts, the spectrum of the silver ink of Vienna Genesis shows the great- est congruity with the spectrum of reference ink ST1 (4.55 wt% Cu). The intensive chlorine signals in the spectra of the Vienna Genesis, which were attrib- uted to the corrosion product silver chloride (AgCl), led to the question of whether the inks used contained chlorine themselves or if the inorganic compound resulted from en- vironmental influences. Therefore, sodium chloride was added to one reference ink (ST1) during the production process of the ink in accordance to a historic recipe, in order to imitate an internal source of chlorine. Furthermore, additional samples of each reference ink were produced and moistened with a solution of sodium chloride (3.5 wt%) in the course of the ageing study, in order to reproduce the impact of an external (environmental) source. The comparison of the spectra of the sodium chloride containing reference ink ST1_B, reference ink ST11_C, which was moistened with a solution of sodium chloride, and the silver ink of folio 1 of the Vienna Genesis is shown in figure 14. All three spectra reveal in- tensive chlorine K α -signals, without significant variations of the peak intensities. Considering the fact that an external source of chlorine, for example in the form of air pollutants, would not have only had impact on the silver ink, but on the parchment as well, the spectra of the related parchments of sample ST1_B, ST11_C and folio 1 of the Vienna Genesis are compared in figure 15. While intensive chlorine signals are present in the spectra of reference sample ST11_C and of folio 1, only a peak of low intensity can be seen in the spectrum of reference sample ST1_B. Due to these observations, we presume that the intensive chlorine peak in the spectra of the inks of Vienna Genesis results at least partially from an environmental chlorine source. Nevertheless, as can be seen from figure 10, the chlorine peak in the ink is much more intense than in the parchment. Therefore, an additional internal origin, or an accumulation of the corrosion product in the ink might both be possible. Open-Access-Publikation im Sinne der CC-Lizenz BY 4.0
zurück zum  Buch The Vienna Genesis - Material analysis and conservation of a Late Antique illuminated manuscript on purple parchment"
The Vienna Genesis Material analysis and conservation of a Late Antique illuminated manuscript on purple parchment