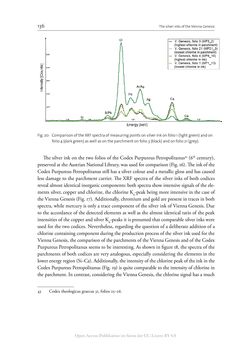 136 The silver inks of the Vienna Genesis The silver ink on the two folios of the Codex Purpureus Petropolitanus43 (6th century), preserved at the Austrian National Library, was used for comparison (Fig. 16). The ink of the Codex Purpureus Petropolitanus still has a silver colour and a metallic gloss and has caused less damage to the parchment carrier. The XRF spectra of the silver inks of both codices reveal almost identical inorganic components: both spectra show intensive signals of the ele- ments silver, copper and chlorine, the chlorine K α -peak being more intensive in the case of the Vienna Genesis (Fig. 17). Additionally, chromium and gold are present in traces in both spectra, while mercury is only a trace component of the silver ink of Vienna Genesis. Due to the accordance of the detected elements as well as the almost identical ratio of the peak intensities of the copper and silver K α -peaks it is presumed that comparable silver inks were used for the two codices. Nevertheless, regarding the question of a deliberate addition of a chlorine containing component during the production process of the silver ink used for the Vienna Genesis, the comparison of the parchments of the Vienna Genesis and of the Codex Purpureus Petropolitanus seems to be interesting. As shown in figure 18, the spectra of the parchments of both codices are very analogous, especially considering the elements in the lower energy region (Si–Ca). Additionally, the intensity of the chlorine peak of the ink in the Codex Purpureus Petropolitanus (Fig. 19) is quite comparable to the intensity of chlorine in the parchment. In contrast, considering the Vienna Genesis, the chlorine signal has a much 43 Codex theologicus graecus 31, folios 25–26. Fig. 20: Comparison of the XRF spectra of measuring points on silver ink on folio 1 (light green) and on folio 4 (dark green) as well as on the parchment on folio 3 (black) and on folio 21 (grey). Open-Access-Publikation im Sinne der CC-Lizenz BY 4.0
zurück zum  Buch The Vienna Genesis - Material analysis and conservation of a Late Antique illuminated manuscript on purple parchment"
The Vienna Genesis Material analysis and conservation of a Late Antique illuminated manuscript on purple parchment