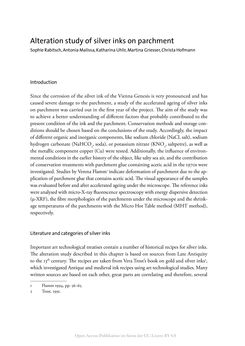 Alteration study of silver inks on parchment Sophie Rabitsch, Antonia Malissa, Katharina Uhlir, Martina Griesser, Christa Hofmann Introduction Since the corrosion of the silver ink of the Vienna Genesis is very pronounced and has caused severe damage to the parchment, a study of the accelerated ageing of silver inks on parchment was carried out in the first year of the project. The aim of the study was to achieve a better understanding of different factors that probably contributed to the present condition of the ink and the parchment. Conservation methods and storage con- ditions should be chosen based on the conclusions of the study. Accordingly, the impact of different organic and inorganic components, like sodium chloride (NaCl, salt), sodium hydrogen carbonate (NaHCO3, soda), or potassium nitrate (KNO3, saltpetre), as well as the metallic component copper (Cu) were tested. Additionally, the influence of environ- mental conditions in the earlier history of the object, like salty sea air, and the contribution of conservation treatments with parchment glue containing acetic acid in the 1970s were investigated. Studies by Verena Flamm1 indicate deformation of parchment due to the ap- plication of parchment glue that contains acetic acid. The visual appearance of the samples was evaluated before and after accelerated ageing under the microscope. The reference inks were analysed with micro-X-ray fluorescence spectroscopy with energy dispersive detection (µ-XRF), the fibre morphologies of the parchments under the microscope and the shrink- age temperatures of the parchments with the Micro Hot Table method (MHT method), respectively. Literature and categories of silver inks Important art technological treatises contain a number of historical recipes for silver inks. The alteration study described in this chapter is based on sources from Late Antiquity to the 13th century. The recipes are taken from Vera Trost’s book on gold and silver inks2, which investigated Antique and medieval ink recipes using art technological studies. Many written sources are based on each other, great parts are correlating and therefore, several 1 Flamm 1994, pp. 56–65. 2 Trost, 1991. Open-Access-Publikation im Sinne der CC-Lizenz BY 4.0
zurück zum  Buch The Vienna Genesis - Material analysis and conservation of a Late Antique illuminated manuscript on purple parchment"
The Vienna Genesis Material analysis and conservation of a Late Antique illuminated manuscript on purple parchment