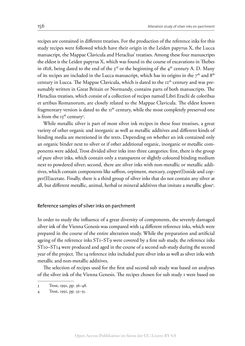 156 Alteration study of silver inks on parchment recipes are contained in different treatises. For the production of the reference inks for this study recipes were followed which have their origin in the Leiden papyrus X, the Lucca manuscript, the Mappae Clavicula and Heraclius’ treatises. Among these four manuscripts the eldest is the Leiden papyrus X, which was found in the course of excavations in Thebes in 1828, being dated to the end of the 3rd or the beginning of the 4th century A. D. Many of its recipes are included in the Lucca manuscript, which has its origins in the 7th and 8th century in Lucca. The Mappae Clavicula, which is dated to the 12th century and was pre- sumably written in Great Britain or Normandy, contains parts of both manuscripts. The Heraclius treatises, which consist of a collection of recipes named Libri Eraclii de coloribus et artibus Romanorum, are closely related to the Mappae Clavicula. The eldest known fragmentary version is dated to the 11th century, while the most completely preserved one is from the 13th century3. While metallic silver is part of most silver ink recipes in these four treatises, a great variety of other organic and inorganic as well as metallic additives and different kinds of binding media are mentioned in the texts. Depending on whether an ink contained only an organic binder next to silver or if other additional organic, inorganic or metallic com- ponents were added, Trost divided silver inks into three categories: first, there is the group of pure silver inks, which contain only a transparent or slightly coloured binding medium next to powdered silver; second, there are silver inks with non-metallic or metallic addi- tives, which contain components like saffron, orpiment, mercury, copper(I)oxide and cop- per(II)acetate. Finally, there is a third group of silver inks that do not contain any silver at all, but different metallic, animal, herbal or mineral additives that imitate a metallic gloss4. Reference samples of silver inks on parchment In order to study the influence of a great diversity of components, the severely damaged silver ink of the Vienna Genesis was compared with 14 different reference inks, which were prepared in the course of the entire alteration study. While the preparation and artificial ageing of the reference inks ST1–ST9 were covered by a first sub study, the reference inks ST10–ST14 were produced and aged in the course of a second sub study during the second year of the project. The 14 reference inks included pure silver inks as well as silver inks with metallic and non-metallic additives. The selection of recipes used for the first and second sub study was based on analyses of the silver ink of the Vienna Genesis. The recipes chosen for sub study 1 were based on 3 Trost, 1991, pp. 36–48. 4 Trost, 1991, pp. 33–35. Open-Access-Publikation im Sinne der CC-Lizenz BY 4.0
zurück zum  Buch The Vienna Genesis - Material analysis and conservation of a Late Antique illuminated manuscript on purple parchment"
The Vienna Genesis Material analysis and conservation of a Late Antique illuminated manuscript on purple parchment