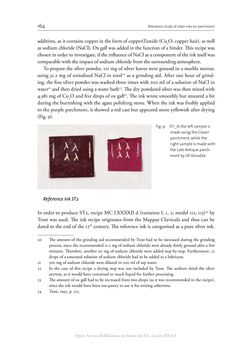 164 Alteration study of silver inks on parchment additives, as it contains copper in the form of copper(I)oxide (Cu2O, copper hair), as well as sodium chloride (NaCl). Ox gall was added in the function of a binder. This recipe was chosen in order to investigate, if the influence of NaCl as a component of the ink itself was comparable with the impact of sodium chloride from the surrounding atmosphere. To prepare the silver powder, 112 mg of silver leaves were ground in a marble mortar, using 31.2 mg of uniodised NaCl in total20 as a grinding aid. After one hour of grind- ing, the fine silver powder was washed three times with 200 ml of a solution of NaCl in water21 and then dried using a water bath22. The dry powdered silver was then mixed with 4.981 mg of Cu2O and five drops of ox gall 23. The ink wrote smoothly but smeared a bit during the burnishing with the agate polishing stone. When the ink was freshly applied to the purple parchment, it showed a red cast but appeared more yellowish after drying (Fig. 9). Reference ink ST2 In order to produce ST2, recipe MC LXXXXII d (variation I, 1, 2; model 112, 113)24 by Trost was used. The ink recipe originates from the Mappae Clavicula and thus can be dated to the end of the 12th century. The reference ink is categorised as a pure silver ink. 20 The amount of the grinding aid recommended by Trost had to be increased during the grinding process, since the recommended 11.2 mg of sodium chloride were already finely ground after a few minutes. Therefore, another 20 mg of sodium chloride were added step by step. Furthermore, 12 drops of a saturated solution of sodium chloride had to be added as a lubricant. 21 500 mg of sodium chloride were diluted in 200 ml of tap water. 22 In the case of this recipe a drying step was not included by Trost. The authors dried the silver anyway, as it would have contained to much liquid for further processing. 23 The amount of ox gall had to be increased from two drops (as it was recommended in the recipe), since the ink would have been too pastry to use it for writing otherwise. 24 Trost, 1991, p. 215. Fig. 9: ST1_A; the left sample is made using the Glaser parchment, while the right sample is made with the Late Antique parch- ment by Jiří Vnouček. Open-Access-Publikation im Sinne der CC-Lizenz BY 4.0
zurück zum  Buch The Vienna Genesis - Material analysis and conservation of a Late Antique illuminated manuscript on purple parchment"
The Vienna Genesis Material analysis and conservation of a Late Antique illuminated manuscript on purple parchment