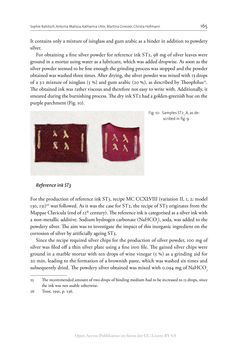 Sophie Rabitsch, Antonia Malissa, Katharina Uhlir, Martina Griesser, Christa Hofmann 165 It contains only a mixture of isinglass and gum arabic as a binder in addition to powdery silver. For obtaining a fine silver powder for reference ink ST2, 98 mg of silver leaves were ground in a mortar using water as a lubricant, which was added dropwise. As soon as the silver powder seemed to be fine enough the grinding process was stopped and the powder obtained was washed three times. After drying, the silver powder was mixed with 13 drops of a 3:1 mixture of isinglass (5 %) and gum arabic (20 %), as described by Theophilus25. The obtained ink was rather viscous and therefore not easy to write with. Additionally, it smeared during the burnishing process. The dry ink ST2 had a golden-greenish hue on the purple parchment (Fig. 10). Reference ink ST3 For the production of reference ink ST3, recipe MC CCXLVIII (variation II, 1, 2; model 130, 131)26 was followed. As it was the case for ST2, the recipe of ST3 originates from the Mappae Clavicula (end of 12th century). The reference ink is categorised as a silver ink with a non-metallic additive. Sodium hydrogen carbonate (NaHCO3), soda, was added to the powdery silver. The aim was to investigate the impact of this inorganic ingredient on the corrosion of silver by artificially ageing ST3. Since the recipe required silver chips for the production of silver powder, 100 mg of silver was filed off a thin silver plate using a fine iron file. The gained silver chips were ground in a marble mortar with ten drops of wine vinegar (5 %) as a grinding aid for 20 min, leading to the formation of a brownish paste, which was washed six times and subsequently dried. The powdery silver obtained was mixed with 0.094 mg of NaHCO3 25 The recommended amount of two drops of binding medium had to be increased to 13 drops, since the ink was not usable otherwise. 26 Trost, 1991, p. 236. Fig. 10: Samples ST2_A; as de- scribed in fig. 9. Open-Access-Publikation im Sinne der CC-Lizenz BY 4.0
zurück zum  Buch The Vienna Genesis - Material analysis and conservation of a Late Antique illuminated manuscript on purple parchment"
The Vienna Genesis Material analysis and conservation of a Late Antique illuminated manuscript on purple parchment