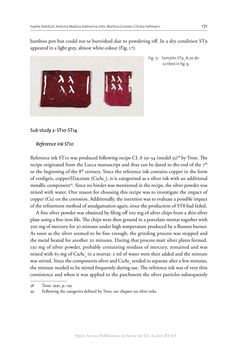 Sophie Rabitsch, Antonia Malissa, Katharina Uhlir, Martina Griesser, Christa Hofmann 171 bamboo pen but could not be burnished due to powdering off. In a dry condition ST9 appeared in a light grey, almost white colour (Fig. 17). Sub study 2: ST10-ST14 Reference ink ST10 Reference ink ST10 was produced following recipe CL δ 29–34 (model 55)38 by Trost. The recipe originated from the Lucca manuscript and thus can be dated to the end of the 7th or the beginning of the 8th century. Since the reference ink contains copper in the form of verdigris, copper(II)acetate (CuAc2), it is categorised as a silver ink with an additional metallic component39. Since no binder was mentioned in the recipe, the silver powder was mixed with water. One reason for choosing this recipe was to investigate the impact of copper (Cu) on the corrosion. Additionally, the intention was to evaluate a possible impact of the refinement method of amalgamation again, since the production of ST8 had failed. A fine silver powder was obtained by filing off 100 mg of silver chips from a thin silver plate using a fine iron file. The chips were then ground in a porcelain mortar together with 300 mg of mercury for 30 minutes under high temperature produced by a Bunsen burner. As soon as the silver seemed to be fine enough, the grinding process was stopped and the metal heated for another 20 minutes. During that process matt silver plates formed. 130 mg of silver powder, probably containing residues of mercury, remained and was mixed with 65 mg of CuAc2 in a mortar. 2 ml of water were then added and the mixture was stirred. Since the components silver and CuAc2 tended to separate after a few minutes, the mixture needed to be stirred frequently during use. The reference ink was of very thin consistence and when it was applied to the parchment the silver particles subsequently 38 Trost, 1991, p. 139. 39 Following the categories defined by Trost, see chapter on silver inks. Fig. 17: Samples ST9_A; as de- scribed in fig. 9. Open-Access-Publikation im Sinne der CC-Lizenz BY 4.0
zurück zum  Buch The Vienna Genesis - Material analysis and conservation of a Late Antique illuminated manuscript on purple parchment"
The Vienna Genesis Material analysis and conservation of a Late Antique illuminated manuscript on purple parchment