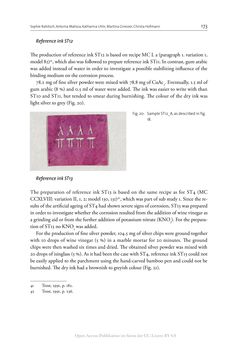 Sophie Rabitsch, Antonia Malissa, Katharina Uhlir, Martina Griesser, Christa Hofmann 173 Reference ink ST12 The production of reference ink ST12 is based on recipe MC L a (paragraph 1. variation 1, model 82)41, which also was followed to prepare reference ink ST11. In contrast, gum arabic was added instead of water in order to investigate a possible stabilizing influence of the binding medium on the corrosion process. 78.2 mg of fine silver powder were mixed with 78.8 mg of CuAc2. Eventually, 1.5 ml of gum arabic (8 %) and 0.5 ml of water were added. The ink was easier to write with than ST10 and ST11, but tended to smear during burnishing. The colour of the dry ink was light silver to grey (Fig. 20). Reference ink ST13 The preparation of reference ink ST13 is based on the same recipe as for ST4 (MC CCXLVIII: variation II, 1, 2; model 130, 131)42, which was part of sub study 1. Since the re- sults of the artificial ageing of ST4 had shown severe signs of corrosion, ST13 was prepared in order to investigate whether the corrosion resulted from the addition of wine vinegar as a grinding aid or from the further addition of potassium nitrate (KNO3). For the prepara- tion of ST13 no KNO3 was added. For the production of fine silver powder, 104.5 mg of silver chips were ground together with 10 drops of wine vinegar (5 %) in a marble mortar for 20 minutes. The ground chips were then washed six times and dried. The obtained silver powder was mixed with 20 drops of isinglass (5 %). As it had been the case with ST4, reference ink ST13 could not be easily applied to the parchment using the hand-carved bamboo pen and could not be burnished. The dry ink had a brownish to greyish colour (Fig. 21). 41 Trost, 1991, p. 182. 42 Trost, 1991, p. 236. Fig. 20: Sample ST12_A, as described in fig. 18. Open-Access-Publikation im Sinne der CC-Lizenz BY 4.0
zurück zum  Buch The Vienna Genesis - Material analysis and conservation of a Late Antique illuminated manuscript on purple parchment"
The Vienna Genesis Material analysis and conservation of a Late Antique illuminated manuscript on purple parchment