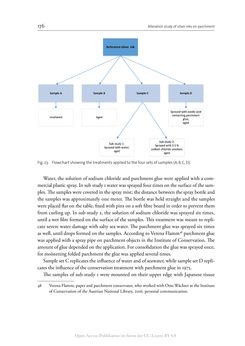 176 Alteration study of silver inks on parchment Water, the solution of sodium chloride and parchment glue were applied with a com- mercial plastic spray. In sub study 1 water was sprayed four times on the surface of the sam- ples. The samples were covered in the spray mist; the distance between the spray bottle and the samples was approximately one meter. The bottle was held straight and the samples were placed flat on the table, fixed with pins on a soft fibre board in order to prevent them from curling up. In sub study 2, the solution of sodium chloride was sprayed six times, until a wet film formed on the surface of the samples. This treatment was meant to repli- cate severe water damage with salty sea water. The parchment glue was sprayed six times as well, until drops formed on the samples. According to Verena Flamm48 parchment glue was applied with a spray pipe on parchment objects in the Institute of Conservation. The amount of glue depended on the application. For consolidation the glue was sprayed once, for moistening folded parchment the glue was applied several times. Sample set C replicates the influence of water and of seawater, while sample set D repli- cates the influence of the conservation treatment with parchment glue in 1975. The samples of sub study 1 were mounted on their upper edge with Japanese tissue 48 Verena Flamm, paper and parchment conservator, who worked with Otto Wächter at the Institute of Conservation of the Austrian National Library, 2016, personal communication. Fig. 23: Flowchart showing the treatments applied to the four sets of samples (A, B, C, D). Open-Access-Publikation im Sinne der CC-Lizenz BY 4.0
zurück zum  Buch The Vienna Genesis - Material analysis and conservation of a Late Antique illuminated manuscript on purple parchment"
The Vienna Genesis Material analysis and conservation of a Late Antique illuminated manuscript on purple parchment