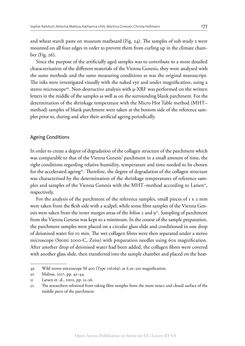 Sophie Rabitsch, Antonia Malissa, Katharina Uhlir, Martina Griesser, Christa Hofmann 177 and wheat starch paste on museum matboard (Fig. 24). The samples of sub study 2 were mounted on all four edges in order to prevent them from curling up in the climate cham- ber (Fig. 26). Since the purpose of the artificially aged samples was to contribute to a more detailed characterisation of the different materials of the Vienna Genesis, they were analysed with the same methods and the same measuring conditions as was the original manuscript. The inks were investigated visually with the naked eye and under magnification, using a stereo microscope49. Non-destructive analysis with µ-XRF was performed on the written letters in the middle of the samples as well as on the surrounding blank parchment. For the determination of the shrinkage temperature with the Micro Hot Table method (MHT– method) samples of blank parchment were taken at the bottom side of the reference sam- ples prior to, during and after their artificial ageing periodically. Ageing Conditions In order to create a degree of degradation of the collagen structure of the parchment which was comparable to that of the Vienna Genesis’ parchment in a small amount of time, the right conditions regarding relative humidity, temperature and time needed to be chosen for the accelerated ageing50. Therefore, the degree of degradation of the collagen structure was characterised by the determination of the shrinkage temperatures of reference sam- ples and samples of the Vienna Genesis with the MHT–method according to Larsen51, respectively. For the analysis of the parchment of the reference samples, small pieces of 1 x 2 mm were taken from the flesh side with a scalpel, while some fibre samples of the Vienna Gen- esis were taken from the inner margin areas of the folios 2 and 952. Sampling of parchment from the Vienna Genesis was kept to a minimum. In the course of the sample preparation, the parchment samples were placed on a circular glass slide and conditioned in one drop of deionised water for 10 min. The wet collagen fibres were then separated under a stereo microscope (Stemi 2000-C, Zeiss) with preparation needles using 60x magnification. After another drop of deionised water had been added, the collagen fibres were covered with another glass slide, then transferred into the sample chamber and placed on the heat- 49 Wild stereo microscope M 400 (Type 126269); at 6.3x–32x magnification. 50 Malissa, 2017, pp. 42–44. 51 Larsen et. al., 2002, pp. 55–56. 52 The researchers refrained from taking fibre samples from the more intact and closed surface of the middle parts of the parchment. Open-Access-Publikation im Sinne der CC-Lizenz BY 4.0
zurück zum  Buch The Vienna Genesis - Material analysis and conservation of a Late Antique illuminated manuscript on purple parchment"
The Vienna Genesis Material analysis and conservation of a Late Antique illuminated manuscript on purple parchment