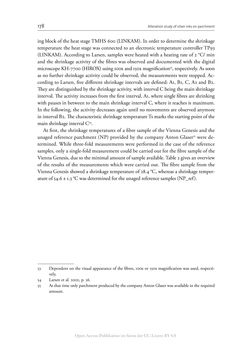 178 Alteration study of silver inks on parchment ing block of the heat stage TMHS 600 (LINKAM). In order to determine the shrinkage temperature the heat stage was connected to an electronic temperature controller TP93 (LINKAM). According to Larsen, samples were heated with a heating rate of 2 °C/ min and the shrinkage activity of the fibres was observed and documented with the digital microscope KH-7700 (HIROX) using 100x and 150x magnification53, respectively. As soon as no further shrinkage activity could be observed, the measurements were stopped. Ac- cording to Larsen, five different shrinkage intervals are defined: A1, B1, C, A2 and B2. They are distinguished by the shrinkage activity, with interval C being the main shrinkage interval. The activity increases from the first interval, A1, where single fibres are shrinking with pauses in between to the main shrinkage interval C, where it reaches is maximum. In the following, the activity decreases again until no movements are observed anymore in interval B2. The characteristic shrinkage temperature Ts marks the starting point of the main shrinkage interval C54. At first, the shrinkage temperatures of a fibre sample of the Vienna Genesis and the unaged reference parchment (NP) provided by the company Anton Glaser55 were de- termined. While three-fold measurements were performed in the case of the reference samples, only a single-fold measurement could be carried out for the fibre sample of the Vienna Genesis, due to the minimal amount of sample available. Table 2 gives an overview of the results of the measurements which were carried out. The fibre sample from the Vienna Genesis showed a shrinkage temperature of 28.4 °C, whereas a shrinkage temper- ature of 54.6 ± 1.3 °C was determined for the unaged reference samples (NP_ref). 53 Dependent on the visual appearance of the fibres, 100x or 150x magnification was used, respecti- vely. 54 Larsen et al. 2002, p. 56. 55 At that time only parchment produced by the company Anton Glaser was available in the required amount. Open-Access-Publikation im Sinne der CC-Lizenz BY 4.0
zurück zum  Buch The Vienna Genesis - Material analysis and conservation of a Late Antique illuminated manuscript on purple parchment"
The Vienna Genesis Material analysis and conservation of a Late Antique illuminated manuscript on purple parchment