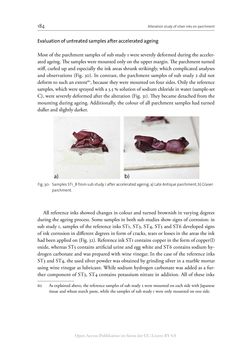 184 Alteration study of silver inks on parchment Evaluation of untreated samples after accelerated ageing Most of the parchment samples of sub study 1 were severely deformed during the acceler- ated ageing. The samples were mounted only on the upper margin. The parchment turned stiff, curled up and especially the ink areas shrunk strikingly, which complicated analyses and observations (Fig. 30). In contrast, the parchment samples of sub study 2 did not deform to such an extent60, because they were mounted on four sides. Only the reference samples, which were sprayed with a 3.5 % solution of sodium chloride in water (sample-set C), were severely deformed after the alteration (Fig. 31). They became detached from the mounting during ageing. Additionally, the colour of all parchment samples had turned duller and slightly darker. All reference inks showed changes in colour and turned brownish in varying degrees during the ageing process. Some samples in both sub studies show signs of corrosion: in sub study 1, samples of the reference inks ST1, ST3, ST4, ST5 and ST6 developed signs of ink corrosion in different degrees in form of cracks, tears or losses in the areas the ink had been applied on (Fig. 32). Reference ink ST1 contains copper in the form of copper(I) oxide, whereas ST5 contains artificial urine and egg white and ST6 contains sodium hy- drogen carbonate and was prepared with wine vinegar. In the case of the reference inks ST3 and ST4, the used silver powder was obtained by grinding silver in a marble mortar using wine vinegar as lubricant. While sodium hydrogen carbonate was added as a fur- ther component of ST3, ST4 contains potassium nitrate in addition. All of these inks 60 As explained above, the reference samples of sub study 2 were mounted on each side with Japanese tissue and wheat starch paste, while the samples of sub study 1 were only mounted on one side. Fig. 30: Samples ST1_B from sub study 1 after accelerated ageing: a) Late Antique parchment, b) Glaser parchment. Open-Access-Publikation im Sinne der CC-Lizenz BY 4.0
zurück zum  Buch The Vienna Genesis - Material analysis and conservation of a Late Antique illuminated manuscript on purple parchment"
The Vienna Genesis Material analysis and conservation of a Late Antique illuminated manuscript on purple parchment