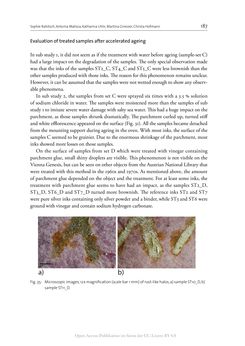 Sophie Rabitsch, Antonia Malissa, Katharina Uhlir, Martina Griesser, Christa Hofmann 187 Evaluation of treated samples after accelerated ageing In sub study 1, it did not seem as if the treatment with water before ageing (sample-set C) had a large impact on the degradation of the samples. The only special observation made was that the inks of the samples ST2_C, ST4_C and ST5_C were less brownish than the other samples produced with those inks. The reason for this phenomenon remains unclear. However, it can be assumed that the samples were not wetted enough to show any observ- able phenomena. In sub study 2, the samples from set C were sprayed six times with a 3.5 % solution of sodium chloride in water. The samples were moistened more than the samples of sub study 1 to imitate severe water damage with salty sea water. This had a huge impact on the parchment, as those samples shrunk dramatically. The parchment curled up, turned stiff and white efflorescence appeared on the surface (Fig. 31). All the samples became detached from the mounting support during ageing in the oven. With most inks, the surface of the samples C seemed to be grainier. Due to the enormous shrinkage of the parchment, most inks showed more losses on those samples. On the surface of samples from set D which were treated with vinegar containing parchment glue, small shiny droplets are visible. This phenomenon is not visible on the Vienna Genesis, but can be seen on other objects from the Austrian National Library that were treated with this method in the 1960s and 1970s. As mentioned above, the amount of parchment glue depended on the object and the treatment. For at least some inks, the treatment with parchment glue seems to have had an impact, as the samples ST2_D, ST3_D, ST6_D and ST7_D turned more brownish. The reference inks ST2 and ST7 were pure silver inks containing only silver powder and a binder, while ST3 and ST6 were ground with vinegar and contain sodium hydrogen carbonate. Fig. 35: Microscopic images, 12x magnification (scale bar 1 mm) of rust-like halos, a) sample ST10_D, b) sample ST11_D. Open-Access-Publikation im Sinne der CC-Lizenz BY 4.0
zurück zum  Buch The Vienna Genesis - Material analysis and conservation of a Late Antique illuminated manuscript on purple parchment"
The Vienna Genesis Material analysis and conservation of a Late Antique illuminated manuscript on purple parchment