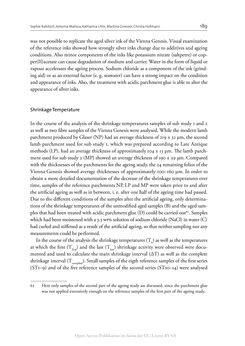 Sophie Rabitsch, Antonia Malissa, Katharina Uhlir, Martina Griesser, Christa Hofmann 189 was not possible to replicate the aged silver ink of the Vienna Genesis. Visual examination of the reference inks showed how strongly silver inks change due to additives and ageing conditions. Also minor components of the inks like potassium nitrate (saltpetre) or cop- per(II)acetate can cause degradation of medium and carrier. Water in the form of liquid or vapour accelerates the ageing process. Sodium chloride as a component of the ink (grind- ing aid) or as an external factor (e. g. seawater) can have a strong impact on the condition and appearance of inks. Also, the treatment with acidic parchment glue is able to alter the appearance of silver inks. Shrinkage Temperature In the course of the analysis of the shrinkage temperatures samples of sub study 1 and 2 as well as two fibre samples of the Vienna Genesis were analysed. While the modern lamb parchment produced by Glaser (NP) had an average thickness of 219 ± 32 µm, the second lamb parchment used for sub study 1, which was prepared according to Late Antique methods (LP), had an average thickness of approximately 104 ± 13 µm. The lamb parch- ment used for sub study 2 (MP) showed an average thickness of 190 ± 29 µm. Compared with the thicknesses of the parchments for the ageing study, the 24 remaining folios of the Vienna Genesis showed average thicknesses of approximately 100–160 µm. In order to obtain a more detailed documentation of the decrease of the shrinkage temperatures over time, samples of the reference parchments NP, LP and MP were taken prior to and after the artificial ageing as well as in between, i. e. after one half of the ageing time had passed. Due to the different conditions of the samples after the artificial ageing, only determina- tions of the shrinkage temperatures of the unmodified aged samples (B) and the aged sam- ples that had been treated with acidic parchment glue (D) could be carried out62. Samples which had been moistened with a 3.5 wt% solution of sodium chloride (NaCl) in water (C) had curled and stiffened as a result of the artificial ageing, so that neither sampling nor any measurements could be performed. In the course of the analysis the shrinkage temperatures (TS) as well as the temperatures at which the first (Tfirst) and the last (Tlast) shrinkage activity were observed were docu- mented and used to calculate the main shrinkage interval (ΔT) as well as the complete shrinkage interval (Tcomplete). Small samples of the eigth reference samples of the first series (ST1–9) and of the five reference samples of the second series (ST10–14) were analysed 62 Here only samples of the second part of the ageing study are discussed, since the parchment glue was not applied extensively enough on the reference samples of the first part of the ageing study. Open-Access-Publikation im Sinne der CC-Lizenz BY 4.0
zurück zum  Buch The Vienna Genesis - Material analysis and conservation of a Late Antique illuminated manuscript on purple parchment"
The Vienna Genesis Material analysis and conservation of a Late Antique illuminated manuscript on purple parchment