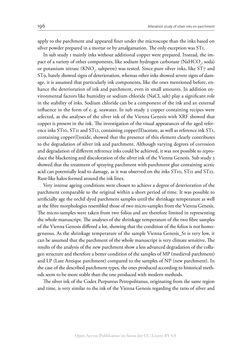 196 Alteration study of silver inks on parchment apply to the parchment and appeared finer under the microscope than the inks based on silver powder prepared in a mortar or by amalgamation. The only exception was ST1. In sub study 1 mainly inks without additional copper were prepared. Instead, the im- pact of a variety of other components, like sodium hydrogen carbonate (NaHCO3, soda) or potassium nitrate (KNO3, saltpetre) was tested. Since pure silver inks, like ST7 and ST9, barely showed signs of deterioration, whereas other inks showed severe signs of dam- age, it is assumed that particularly ink components, like the ones mentioned before, en- hance the deterioration of ink and parchment, even in small amounts. In addition en- vironmental factors like humidity or sodium chloride (NaCl, salt) play a significant role in the stability of inks. Sodium chloride can be a component of the ink and an external influence in the form of e. g. seawater. In sub study 2 copper containing recipes were selected, as the analyses of the silver ink of the Vienna Genesis with XRF showed that copper is present in the ink. The investigation of the visual appearances of the aged refer- ence inks ST10, ST11 and ST12, containing copper(II)acetate, as well as reference ink ST1, containing copper(I)oxide, showed that the presence of this element clearly contributes to the degradation of silver ink and parchment. Although varying degrees of corrosion and degradation of different reference inks could be achieved, it was not possible to repro- duce the blackening and discoloration of the silver ink of the Vienna Genesis. Sub study 2 showed that the treatment of spraying parchment with parchment glue containing acetic acid can potentially lead to damage, as it was observed on the inks ST10, ST11 and ST12. Rust-like halos formed around the ink lines. Very intense ageing conditions were chosen to achieve a degree of deterioration of the parchment comparable to the original within a short period of time. It was possible to artificially age the orchil dyed parchment samples until the shrinkage temperature as well as the fibre morphologies resembled those of two micro-samples from the Vienna Genesis. The micro-samples were taken from two folios and are therefore limited in representing the whole manuscript. The analyses of the shrinkage temperature of the two fibre samples of the Vienna Genesis differed a lot, showing that the condition of the folios is not homo- geneous. As the shrinkage temperature of the sample Vienna Genesis_S1 is very low, it can be assumed that the parchment of the whole manuscript is very climate sensitive. The results of the analysis of the new parchment show a less advanced degradation of the colla- gen structure and therefore a better condition of the samples of MP (medieval parchment) and LP (Late Antique parchment) compared to the samples of NP (new parchment). In the case of the described parchment types, the ones produced according to historical meth- ods seem to be more stable than the one produced with modern methods. The silver ink of the Codex Purpureus Petropolitanus, originating from the same region and time, is very similar to the ink of the Vienna Genesis regarding the ratio of silver and Open-Access-Publikation im Sinne der CC-Lizenz BY 4.0
zurück zum  Buch The Vienna Genesis - Material analysis and conservation of a Late Antique illuminated manuscript on purple parchment"
The Vienna Genesis Material analysis and conservation of a Late Antique illuminated manuscript on purple parchment