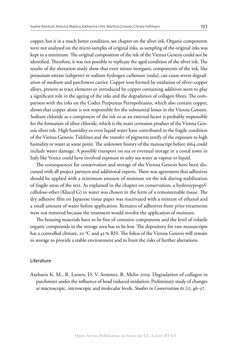 Sophie Rabitsch, Antonia Malissa, Katharina Uhlir, Martina Griesser, Christa Hofmann 197 copper, but is in a much better condition, see chapter on the silver ink. Organic components were not analysed on the micro-samples of original inks, as sampling of the original inks was kept to a minimum. The original composition of the ink of the Vienna Genesis could not be identified. Therefore, it was not possible to replicate the aged condition of the silver ink. The results of the alteration study show that even minor inorganic components of the ink, like potassium nitrate (saltpetre) or sodium hydrogen carbonate (soda), can cause severe degrad- ation of medium and parchment carrier. Copper ions formed by oxidation of silver–copper alloys, present as trace elements or introduced by copper containing additives seem to play a significant role in the ageing of the inks and the degradation of collagen fibres. The com- parison with the inks on the Codex Purpureus Petropolitanus, which also contain copper, shows that copper alone is not responsible for the substantial losses in the Vienna Genesis. Sodium chloride as a component of the ink or as an external factor is probably responsible for the formation of silver chloride, which is the main corrosion product of the Vienna Gen- esis silver ink. High humidity or even liquid water have contributed to the fragile condition of the Vienna Genesis. Tidelines and the transfer of pigments testify of the exposure to high humidity or water at some point. The unknown history of the manuscript before 1664 could include water damage. A possible transport on sea or eventual storage in a costal town in Italy like Venice could have involved exposure to salty sea water as vapour or liquid. The consequences for conservation and storage of the Vienna Genesis have been dis- cussed with all project partners and additional experts. There was agreement that adhesives should be applied with a minimum amount of moisture on the ink during stabilisation of fragile areas of the text. As explained in the chapter on conservation, a hydroxypropyl- cellulose-ether (Klucel G) in water was chosen in the form of a remoistenable tissue. The dry adhesive film on Japanese tissue paper was reactivated with a mixture of ethanol and a small amount of water before application. Remains of adhesives from prior treatments were not removed because the treatment would involve the application of moisture. The housing materials have to be free of corrosive components and the level of volatile organic compounds in the storage area has to be low. The depository for rare manuscripts has a controlled climate, 20 °C and 45 % RH. The folios of the Vienna Genesis will remain in storage to provide a stable environment and to limit the risks of further alterations. Literature Axelsson K. M., R. Larsen, D. V. Sommer, R. Melin 2019. Degradation of collagen in parchment under the influence of head induced oxidation: Preliminary study of changes at macroscopic, microscopic and molecular levels. Studies in Conservation 61 (1), 46–57. Open-Access-Publikation im Sinne der CC-Lizenz BY 4.0
zurück zum  Buch The Vienna Genesis - Material analysis and conservation of a Late Antique illuminated manuscript on purple parchment"
The Vienna Genesis Material analysis and conservation of a Late Antique illuminated manuscript on purple parchment