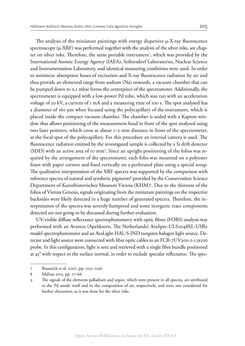 Hofmann, Rabitsch, Malissa, Aceto, Uhlir, Griesser, Calà, Agostino, Fenoglio 205 The analysis of the miniature paintings with energy dispersive µ-X-ray fluorescence spectroscopy (µ-XRF) was performed together with the analysis of the silver inks, see chap- ter on silver inks. Therefore, the same portable instrument7, which was provided by the International Atomic Energy Agency (IAEA), Seibersdorf Laboratories, Nuclear Science and Instrumentation Laboratory, and identical measuring conditions were used. In order to minimize absorption losses of excitation and X-ray fluorescence radiation by air and thus provide an elemental range from sodium (Na) onwards, a vacuum chamber that can be pumped down to 0.1 mbar forms the centrepiece of the spectrometer. Additionally, the spectrometer is equipped with a low-power Pd tube, which was run with an acceleration voltage of 50 kV, a current of 1 mA and a measuring time of 100 s. The spot analysed has a diameter of 160 µm when focused using the polycapillary of the instrument, which is placed inside the compact vacuum chamber. The chamber is sealed with a Kapton win- dow that allows positioning of the measurement head in front of the spot analysed using two laser pointers, which cross at about 1–2 mm distance in front of the spectrometer, at the focal spot of the polycapillary. For this procedure an internal camera is used. The fluorescence radiation emitted by the investigated sample is collected by a Si drift detector (SDD) with an active area of 10 mm2. Since an upright positioning of the folios was re- quired by the arrangement of the spectrometer, each folio was mounted on a polyester foam with paper corners and fixed vertically on a perforated plate using a special setup. The qualitative interpretation of the XRF spectra was supported by the comparison with reference spectra of natural and synthetic pigments8 provided by the Conservation Science Department of Kunsthistorisches Museum Vienna (KHM)9. Due to the thinness of the folios of Vienna Genesis, signals originating from the miniature paintings on the respective backsides were likely detected in a huge number of generated spectra. Therefore, the in- terpretation of the spectra was severely hampered and some inorganic trace components detected are not going to be discussed during further evaluation. UV-visible diffuse reflectance spectrophotometry with optic fibres (FORS) analysis was performed with an Avantes (Apeldoorn, The Netherlands) AvaSpec-ULS2048XL-USB2 model spectrophotometer and an AvaLight-HAL-S-IND tungsten halogen light source. De- tector and light source were connected with fibre optic cables to an FCR-7UV200-2-1,5x100 probe. In this configuration, light is sent and retrieved with a single fibre bundle positioned at 45° with respect to the surface normal, in order to exclude specular reflectance. The spec- 7 Buzanich et al. 2007, pp. 1252–1256. 8 Malissa 2015, pp. 17–66. 9 The signals of the elements palladium and argon, which were present in all spectra, are attributed to the Pd anode itself and to the composition of air, respectively, and were not considered for further discussion, as it was done for the silver inks. Open-Access-Publikation im Sinne der CC-Lizenz BY 4.0
zurück zum  Buch The Vienna Genesis - Material analysis and conservation of a Late Antique illuminated manuscript on purple parchment"
The Vienna Genesis Material analysis and conservation of a Late Antique illuminated manuscript on purple parchment