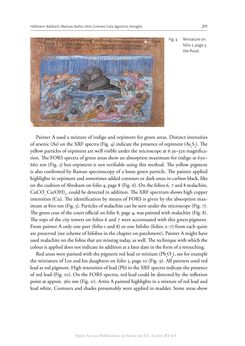 Hofmann, Rabitsch, Malissa, Aceto, Uhlir, Griesser, Calà, Agostino, Fenoglio 211 Painter A used a mixture of indigo and orpiment for green areas. Distinct intensities of arsenic (As) on the XRF spectra (Fig. 4) indicate the presence of orpiment (As2S3). The yellow particles of orpiment are well visible under the microscope at 6.3x–32x magnifica- tion. The FORS spectra of green areas show an absorption maximum for indigo at 650– 660 nm (Fig. 5) but orpiment is not verifiable using this method. The yellow pigment is also confirmed by Raman spectroscopy of a loose green particle. The painter applied highlights in orpiment and sometimes added contours or dark areas in carbon black, like on the cushion of Abraham on folio 4, page 8 (Fig. 6). On the folios 6, 7 and 8 malachite, CuCO3ˑCu(OH)2, could be detected in addition. The XRF spectrum shows high copper intensities (Cu). The identification by means of FORS is given by the absorption max- imum at 800 nm (Fig. 5). Particles of malachite can be seen under the microscope (Fig. 7). The green coat of the court official on folio 8, page 4, was painted with malachite (Fig. 8). The tops of the city towers on folios 6 and 7 were accentuated with this green pigment. From painter A only one part (folio 1 and 8) or one bifolio (folios 2–7) from each quire are preserved (see scheme of bifolios in the chapter on parchment). Painter A might have used malachite on the folios that are missing today, as well. The technique with which the colour is applied does not indicate its addition at a later date in the form of a retouching. Red areas were painted with the pigment red lead or minium (Pb3O4), see for example the miniature of Lot and his daughters on folio 5, page 10 (Fig. 9). All painters used red lead as red pigment. High intensities of lead (Pb) in the XRF spectra indicate the presence of red lead (Fig. 10). On the FORS spectra, red lead could be detected by the inflexion point at approx. 560 nm (Fig. 11). Artist A painted highlights in a mixture of red lead and lead white. Contours and shades presumably were applied in madder. Some areas show Fig. 3: Miniature on folio 2, page 3, the flood. Open-Access-Publikation im Sinne der CC-Lizenz BY 4.0
zurück zum  Buch The Vienna Genesis - Material analysis and conservation of a Late Antique illuminated manuscript on purple parchment"
The Vienna Genesis Material analysis and conservation of a Late Antique illuminated manuscript on purple parchment