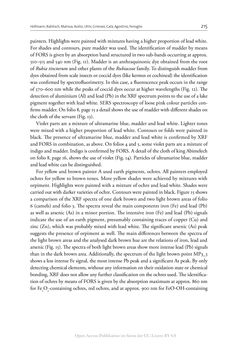 Hofmann, Rabitsch, Malissa, Aceto, Uhlir, Griesser, Calà, Agostino, Fenoglio 215 painters. Highlights were painted with mixtures having a higher proportion of lead white. For shades and contours, pure madder was used. The identification of madder by means of FORS is given by an absorption band structured in two sub-bands occurring at approx. 510–515 and 540 nm (Fig. 11). Madder is an anthraquinonic dye obtained from the root of Rubia tinctorum and other plants of the Rubiaceae family. To distinguish madder from dyes obtained from scale insects or coccid dyes (like kermes or cochineal) the identification was confirmed by spectrofluorimetry. In this case, a fluorescence peak occurs in the range of 570–600 nm while the peaks of coccid dyes occur at higher wavelengths (Fig. 12). The detection of aluminium (Al) and lead (Pb) in the XRF spectrum points to the use of a lake pigment together with lead white. SERS spectroscopy of loose pink colour particles con- firms madder. On folio 8, page 15 a detail shows the use of madder with different shades on the cloth of the servant (Fig. 13). Violet parts are a mixture of ultramarine blue, madder and lead white. Lighter tones were mixed with a higher proportion of lead white. Contours or folds were painted in black. The presence of ultramarine blue, madder and lead white is confirmed by XRF and FORS in combination, as above. On folios 4 and 5, some violet parts are a mixture of indigo and madder. Indigo is confirmed by FORS. A detail of the cloth of king Abimelech on folio 8, page 16, shows the use of violet (Fig. 14). Particles of ultramarine blue, madder and lead white can be distinguished. For yellow and brown painter A used earth pigments, ochres. All painters employed ochres for yellow to brown tones. More yellow shades were achieved by mixtures with orpiment. Highlights were painted with a mixture of ochre and lead white. Shades were carried out with darker varieties of ochre. Contours were painted in black. Figure 15 shows a comparison of the XRF spectra of one dark brown and two light brown areas of folio 6 (camels) and folio 3. The spectra reveal the main components iron (Fe) and lead (Pb) as well as arsenic (As) in a minor portion. The intensive iron (Fe) and lead (Pb) signals indicate the use of an earth pigment, presumably containing traces of copper (Cu) and zinc (Zn), which was probably mixed with lead white. The significant arsenic (As) peak suggests the presence of orpiment as well. The main differences between the spectra of the light brown areas and the analysed dark brown hue are the relations of iron, lead and arsenic (Fig. 15). The spectra of both light brown areas show more intense lead (Pb) signals than in the dark brown area. Additionally, the spectrum of the light brown point MP3_5 shows a less intense Fe signal, the most intense Pb peak and a significant As peak. By only detecting chemical elements, without any information on their oxidation state or chemical bonding, XRF does not allow any further classification on the ochres used. The identifica- tion of ochres by means of FORS is given by the absorption maximum at approx. 860 nm for Fe2O3-containing ochres, red ochres, and at approx. 900 nm for FeO-OH-containing Open-Access-Publikation im Sinne der CC-Lizenz BY 4.0
zurück zum  Buch The Vienna Genesis - Material analysis and conservation of a Late Antique illuminated manuscript on purple parchment"
The Vienna Genesis Material analysis and conservation of a Late Antique illuminated manuscript on purple parchment