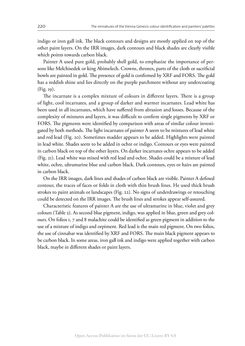 220 The miniatures of the Vienna Genesis: colour identification and painters’ palettes indigo or iron gall ink. The black contours and designs are mostly applied on top of the other paint layers. On the IRR images, dark contours and black shades are clearly visible which points towards carbon black. Painter A used pure gold, probably shell gold, to emphasize the importance of per- sons like Melchisedek or king Abimelech. Crowns, thrones, parts of the cloth or sacrificial bowls are painted in gold. The presence of gold is confirmed by XRF and FORS. The gold has a reddish shine and lies directly on the purple parchment without any undercoating (Fig. 19). The incarnate is a complex mixture of colours in different layers. There is a group of light, cool incarnates, and a group of darker and warmer incarnates. Lead white has been used in all incarnates, which have suffered from abrasion and losses. Because of the complexity of mixtures and layers, it was difficult to confirm single pigments by XRF or FORS. The pigments were identified by comparison with areas of similar colour investi- gated by both methods. The light incarnates of painter A seem to be mixtures of lead white and red lead (Fig. 20). Sometimes madder appears to be added. Highlights were painted in lead white. Shades seem to be added in ochre or indigo. Contours or eyes were painted in carbon black on top of the other layers. On darker incarnates ochre appears to be added (Fig. 21). Lead white was mixed with red lead and ochre. Shades could be a mixture of lead white, ochre, ultramarine blue and carbon black. Dark contours, eyes or hairs are painted in carbon black. On the IRR images, dark lines and shades of carbon black are visible. Painter A defined contour, the traces of faces or folds in cloth with thin brush lines. He used thick brush strokes to paint animals or landscapes (Fig. 22). No signs of underdrawings or retouching could be detected on the IRR images. The brush lines and strokes appear self-assured. Characteristic features of painter A are the use of ultramarine in blue, violet and grey colours (Table 2). As second blue pigment, indigo, was applied in blue, green and grey col- ours. On folios 1, 7 and 8 malachite could be identified as green pigment in addition to the use of a mixture of indigo and orpiment. Red lead is the main red pigment. On two folios, the use of cinnabar was identified by XRF and FORS. The main black pigment appears to be carbon black. In some areas, iron gall ink and indigo were applied together with carbon black, maybe in different shades or paint layers. Open-Access-Publikation im Sinne der CC-Lizenz BY 4.0
zurück zum  Buch The Vienna Genesis - Material analysis and conservation of a Late Antique illuminated manuscript on purple parchment"
The Vienna Genesis Material analysis and conservation of a Late Antique illuminated manuscript on purple parchment