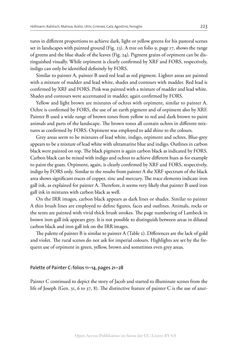 Hofmann, Rabitsch, Malissa, Aceto, Uhlir, Griesser, Calà, Agostino, Fenoglio 223 tures in different proportions to achieve dark, light or yellow greens for his pastoral scenes set in landscapes with painted ground (Fig. 23). A tree on folio 9, page 17, shows the range of greens and the blue shade of the leaves (Fig. 24). Pigment grains of orpiment can be dis- tinguished visually. While orpiment is clearly confirmed by XRF and FORS, respectively, indigo can only be identified definitely by FORS. Similar to painter A, painter B used red lead as red pigment. Lighter areas are painted with a mixture of madder and lead white, shades and contours with madder. Red lead is confirmed by XRF and FORS. Pink was painted with a mixture of madder and lead white. Shades and contours were accentuated in madder, again confirmed by FORS. Yellow and light brown are mixtures of ochres with orpiment, similar to painter A. Ochre is confirmed by FORS, the use of an earth pigment and of orpiment also by XRF. Painter B used a wide range of brown tones from yellow to red and dark brown to paint animals and parts of the landscape. The brown tones all contain ochres in different mix- tures as confirmed by FORS. Orpiment was employed to add shine to the colours. Grey areas seem to be mixtures of lead white, indigo, orpiment and ochres. Blue-grey appears to be a mixture of lead white with ultramarine blue and indigo. Outlines in carbon black were painted on top. The black pigment is again carbon black as indicated by FORS. Carbon black can be mixed with indigo and ochres to achieve different hues as for example to paint the goats. Orpiment, again, is clearly confirmed by XRF and FORS, respectively, indigo by FORS only. Similar to the results from painter A the XRF spectrum of the black area shows significant traces of copper, zinc and mercury. The trace elements indicate iron gall ink, as explained for painter A. Therefore, it seems very likely that painter B used iron gall ink in mixtures with carbon black as well. On the IRR images, carbon black appears as dark lines or shades. Similar to painter A thin brush lines are employed to define figures, faces and outlines. Animals, rocks or the tents are painted with vivid thick brush strokes. The page numbering of Lambeck in brown iron gall ink appears grey. It is not possible to distinguish between areas in diluted carbon black and iron gall ink on the IRR images. The palette of painter B is similar to painter A (Table 2). Differences are the lack of gold and violet. The rural scenes do not ask for imperial colours. Highlights are set by the fre- quent use of orpiment in green, yellow, brown and sometimes even grey areas. Palette of Painter C: folios 11–14, pages 21–28 Painter C continued to depict the story of Jacob and started to illuminate scenes from the life of Joseph (Gen. 31, 6 to 37, 8). The distinctive feature of painter C is the use of azur- Open-Access-Publikation im Sinne der CC-Lizenz BY 4.0
zurück zum  Buch The Vienna Genesis - Material analysis and conservation of a Late Antique illuminated manuscript on purple parchment"
The Vienna Genesis Material analysis and conservation of a Late Antique illuminated manuscript on purple parchment